Items related to Revisiting America: Readings in Race, Culture, and... 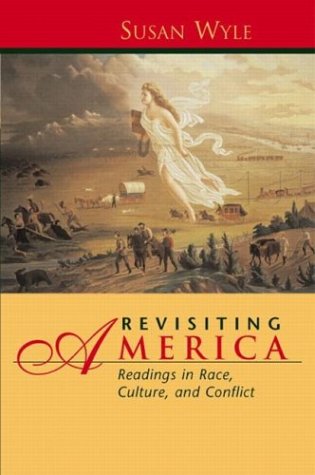 This composition reader, roughly organized chronologically, offers contributions on a myriad of racial and cultural struggles in past and present America. Its combination of primary, secondary, and literary sources encourages readers to think critically about the issues which have shaped the world around them, which take root in the early history of the United States, and which continue to be important in society today. The book also offers a glimpse into the power of language—written and spoken—in shaping ideas, attitudes, and politics when conflicts arise. A wide range of readings (by both well- and lesser-known authors), traces the evolution of conflicts in American history from the 17th century on, and compares and contrasts issues involving race, class, and gender over those centuries. An engaging variety of topics includes transcripts from the Salem witch trials, speeches and writings by a number of native Americans, journals from women who dressed as men in the Civil War so they could fight, and presidential speeches dating back to the 18th century. For anyone who wants to listen to the historical voices that have come together to make America the complex and multicultural place that it is today.

Tracing the evolution of race, culture, and conflict in America

REVISITING AMERICA—This chronologically organized reader traces American racial and cultural struggles and triumphs through the use of primary, secondary, and literary sources, encouraging you to think critically about the issues that have shaped the world around us.

Revisiting America: Readings in Race, Culture, and Conflict is a composition reader designed for first-year college students. Roughly organized chronologically, this text offers readings on myriad racial and cultural struggles in past and present America. The philosophy behind this reader is that a combination of primary, secondary, and literary sources will encourage students to think critically about the issues that have shaped the world around them, issues that take root in the early history of the United States and that continue to be important in contemporary society. These readings will encourage students to think more deeply about cultural and historical issues that offer opportunities for further study and research. This textbook also seeks to offer students a glimpse into the power of language, written and spoken, in shaping ideas, attitudes, and policies when conflicts arise. Revisiting America is not intended to give a full history of all the conflicts of race, class, and gender in the United States, but rather to offer some key readings that will encourage students to think and write critically and to pursue research topics generated by the readings, discussion questions, and writing suggestions in each chapter.

I have included a number of primary and secondary sources that are not widely published, in addition to readings with which teachers and students may be more familiar. For example, students can read Tituba's own trial testimony from the Salem Witch Trials, Ouster's outspoken opinion about Native Americans, and the writings of Luther Standing Bear; readers can peruse Junipero Serra's letter to Father Juan Andres as well as historian Richard White's revisionist view of the mission system; and writers can study the speeches and rhetorical devices of presidents, feminists, Vietnam protesters, and African American civil rights activists in the context of both literary texts and researched essays. These primary, secondary, and literary selections invite students to challenge their own assumptions about race, culture, and conflict in the United States, and to expand, through self -reflection, journal writing, critical reading, analytical essays, comparison essays, and researched arguments, their own understanding of both past and contemporary society in America.

The "Introduction" to this text covers a number of important aspects of reading and writing, including tips on finding and using primary sources, the differences between primary and secondary sources, how to search the Web for accurate and unusual collections, and a brief discussion of fallacies and the evaluation of arguments.

Chapter 1, "Early Conflicts on the Eastern Shore," includes readings that range from a scholarly discussion of the Pocahontas myth to the trial testimonies of the Salem Witch Trials, addressing issues of race, gender, slavery, and freedom in colonial America.

Chapter 3, "Conflicts on the Way West," includes a wide variety of primary and secondary sources dealing with the racial, social, and gender -based conflicts experienced by the men and women who traveled West.

Chapter 4, "Slavery and the Civil War," examines the experiences of slaves and freedmen, soldiers and women, politicians and writers who participated in many different aspects of the Civil War.

Chapter 5, "Conflicts in California: The Missions, the Gold Rush, and Chinese Exclusion," offers a variety of writings that portray the conflicts between the Catholic missions and early Californians, the struggles of men and women who followed the lure of gold, and the experience of the Chinese who built the railroad and then faced a series of exclusion laws.

Chapter 6, "Poverty, Wealth, and the American Dream," includes essays, letters, poetry, and congressional testimony about the experiences of the poorest immigrants and the wealthiest Americans in the late nineteenth and early twentieth century.

Chapter 8, "Civil Rights, Protest, and Foreign Wars," looks at the writings and speeches of women, minorities, and civil rights leaders in the 1960s and 1970s and also examines the rhetoric of politicians and presidents sending troops to Vietnam and the Gulf War.

Chapter 9, "Conflicts Past and Conflicts Present," offers more recent twentieth century and twenty-first century readings that deal with a variety of contemporary issues, including conflicts of gender, race, and immigration, all of which find their roots in issues and events represented in earlier chapters of the text. In addition, this chapter offers written and visual text selections by authors and artists responding to the terrorist attacks of September 11.

Each chapter starts with a brief introduction that provides historical background and "Before You Read" questions for students to keep in mind while reading the selections. Each selection is accompanied by background information on the author, post-reading "Discussion Questions," and post-reading "Writing Suggestions." Each chapter ends with final "Writing Suggestions" and suggestions for "Further Research on the Web."