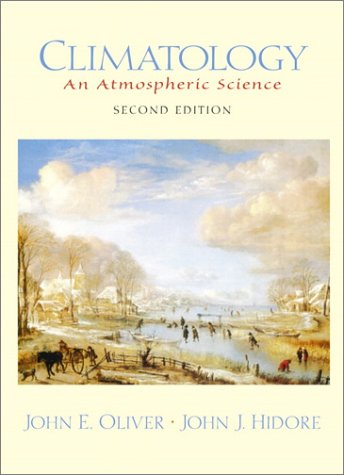 Recent climatic changes (e.g., global warming, El Niño) have brought climate to the forefront of popular science. Climatology: An Atmospheric Science, Second Edition explains the science behind these widely publicized events within the systematic coverage of climate and climatology. In addition, readers will gain an appreciation of the impact climate has on life as well as the basic processes that operate in the atmosphere. Covers Physical And Dynamic Climatology; Regional Climatology; Past And Future Climates; Applied Climatology; and more. For readers interested in science, climatology, or weather.

The years since the publication of first edition of Climatology have been of major significance in the development of the discipline: It has now passed from a rather academic pursuit to a widely known area of study. Climatic change and global warming have become common terms, and there are few global processes that have received as much media coverage as El Nino and La Nina. Associated with the wide coverage of climatic phenomena is the remarkable growth of the World Wide Web (WWW) and its attendant multitude of home pages dealing with weather and climate.

Although these developments have brought climate to the forefront of popular science, such an awareness is fraught with potential problems, not the least of which is sorting out fact from speculation in the printed word and website. Unfortunately, the ready availability of climatic data often results in the use of data without the necessary rigor of appropriate statistical methods and misconceptions unwittingly arise.

It is within such a framework that we have prepared this second edition. Although part of the original content has been retained, the following changes are noted.

The authors wish to acknowledge all those who have helped determine the content and provided useful input into this revised work such as Richard W. Dixon, Southwest Texas State University; Mark L. Hildebrandt, Southern Illinois University; Karl K. Leiker, Westfield State College; David McGinnis, University of Iowa; Donald L. Morgan, Bringham Young University; Jan Westerik, Concord College. We are especially indebted to our wives, Loretta and Suzanne, for both their patience and support.