Items related to The South Through Time: A History of an American Region,...

Boles, John B. The South Through Time: A History of an American Region, Vol. 1

The South Through Time: A History of an American Region, Vol. 1 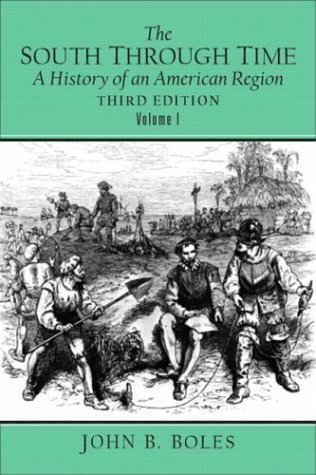 This is a gracefully written narrative of the entire sweep of southern history, from the first settlement by Native Americans through the Civil War. The South Through Time is the most up-to-date, analytical, and stylishly written history of the region available on the market. Comprehensive, interpretive, and inclusive, with much attention given to politics, society, economics, culture, religion, women, and blacks, it offers a discussion of regional variation within the South and broadens its coverage beyond the traditional emphasis on the Atlantic seaboard states. Its comprehensive coverage of the history of the Southern U.S. makes this an appropriate reference work for writers and researchers.

Rich in tradition, the southern portion of the United States has provided the backdrop for some of the most significant historical events in American history. The South Through Time offers an inclusive, interpretative account, providing a comprehensive examination that places in context major events including the rise of slavery and the Civil War without neglecting the overall contours of southern history.

John B. Boles synthesizes recent scholarship to present the latest accepted interpretation on topics such as the original Native American inhabitants; initial European exploration and settlement; the origins of the different colonies; the evolution of slavery and the plantation system; the South's role in the creation of the new nation; the rise of southern distinctness; the role of women; the nature f the antebellum society, economy, and culture; the role of religion; southern politics; the growth of sectionalism and the causes of secession; and the tragedy of the Civil War.

The third edition incorporates the most recent scholarship, contains more illustrative examples, and updates the bibliographical suggestions. As with earlier editions, much attention is given to Native Americans, women, African Americans, and the plain folk, and the overall interpretation emphasizes social and cultural history as well as economic and political. Written in clear, elegant prose, the book makes accessible to students a sophisticated analysis of the South's history.

For at least a half-century, southern history has been arguably the most robust field in the entire discipline of American history. The last twenty-five years have been especially fruitful, and a number of topics— slavery, women's history, the rise of sharecropping, the causes of Populism, and the impact of World War II, to name only a representative few—have undergone revisions in interpretation so fundamental that what was generally accepted just a generation ago is now rejected and replaced with a significantly different interpretation. This abundance of writing and the vigorous interpretative debates that have resulted have been exhilarating to professional historians, but much of the exciting new findings and viewpoints has been confined to scholarly articles and monographs, dissertations, and papers at academic meetings. The lay reader, the student, and the historian not specializing in the history of the South find it difficult to stay abreast of new writings.

Even specialists in the history of the South often discover that the amount of publications appearing in only a portion of the field, say slavery or the Civil War, is so extensive that it precludes keeping up with the entire field. And much of the most impressive new scholarship, methodologically innovative investigations of very narrow topics, is not fitted into, the larger context of southern history. A reader must either remain content with, in effect, core samples of the new scholarship on the South or undergo a daunting regimen of reading in order to comprehend the larger contours of southern history. My purpose in planning this book was to be both inclusive and interpretative in my account. Perhaps having taught in Louisiana and Texas moved me away from seeing southern history as Virginia or Carolina writ large. My intended audience is the advanced undergraduate reader and the large public of lay historians—that plentiful group of well-read amateurs who are fascinated by the past. Of course, I hope that my academic colleagues approve of my distillation of a generation of scholarship and agree with my portrayal of the South's history, but even more do I hope that these pages whet the reading appetite of students and general readers. One of the real glories of American historical scholarship since World War II has been the field of southern history. I hope these pages reveal my debt to the work of two generations of diligent scholars and accurately represent their scholarship to a broad audience.

PREFACE TO THE SECOND EDITION

In response to the comments of faculty who have assigned this book in their classes, I have reformatted it into five parts and thirty-two chapters. I trust that will make it more compatible with course syllabi. The opportunity to revise also gave me the opportunity and incentive to read many of the new books and articles that have been published since I composed the original manuscript. As before, the riches of the writing in the broad field of southern history that I encountered were both inspiring and humbling. I hope that the resulting revisions, from the first chapter to the last, adequately indicate the methodological and analytical sophistication of this scholarship. I have added new material on women and gender, on race relations, on environmental history, on recent political developments, and on many other topics, trying to sharpen my interpretation and provide more illustrative examples. I believe the result is a more useful book. I hope that readers, especially students, will agree, and I look forward to their comments.

PREFACE TO THE THIRD EDITION

I have again corrected several errors, added new material based on additional reading and more recent scholarship, and tried to keep the book abreast of the exciting field of southern history. Southern history is such a dynamic enterprise that it is simply impossible for any one person to be fully aware of all the new scholarship, so I invite readers to send me suggestions for future revisions and to point out sections of the book that in their opinion need clarification or elaboration. Obviously I will use my own discretion with regard to such advice. My email address is boles@rice.edu.

1. The South Through Time: A History of an American Region, Vol. 1

2. The South Through Time: A History of an American Region, Vol. 1

3. The South Through Time: A History of an American Region, Vol. 1

4. The South Through Time: A History of an American Region, Vol. 1 [Paperback] Boles, John B.

5. The South Through Time: A History of an American Region, Vol. 1 Boles, John B.

6. The South Through Time: A History of an American Region, Vol. 1