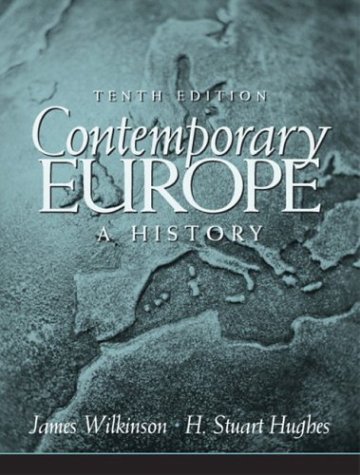 Clearly written and understandably organized, this classic book about European political, social, economic, and intellectual history covers events throughout the Continent from 1914 to the present, treating Europe as a single unit. This new edition features a thoroughly updated final chapter with the latest research on contemporary subjects. The author begins with a view of Europe in 1914 with an emphasis on Eastern Europe, Scandinavia, and the Mediterranean, as well as on Western Europe. The book thoroughly covers such contemporary topics as: the successful launch of the Euro as the currency of the European Union; the election of Vladimir Putin and the emergence of a new Russia; the election of Tony Blair and the rise of New Labor in the United Kingdom; the expansion of NATO; the rise of right-wing extremism; and the tense relations between Europeans and immigrant groups, particularly Muslims; all topics contribute to this being the leading source of information on this important and timely field. Coverage also includes: the First World War; the Russian Revolution and its consequences; technology and society; the high culture of the 1920s; the Great Depression; the Fascist regimes; the Stalinist system; the Second World War; the Cold War; the loss of Colonial Empire; achieving prosperity; and the future of a new Europe. For readers who wish to own a comprehensive and interesting book about the contemporary history of Europe; this book will also serve as an excellent reference for scholars of history or those who are involved in firms that trade internationally.

This classic comprehensive survey of European political, cultural, and intellectual history from 1914 to 1990 covers events in both Western and Eastern Europe.

Clearly written and organized, this classic survey of European political, social, cultural, and economic history covers events from 1914 to the present in a broadly comparative context, treating the entire continent as a single unit. Completely updated to reflect the latest scholarship, the final chapter now covers the successful launch of the Euro, the expansion of the European Union, the elections of Vladimir Putin and Tony Blair, the uneasy presence of new immigrants, and Europe's search for identity in a world dominated by American might.