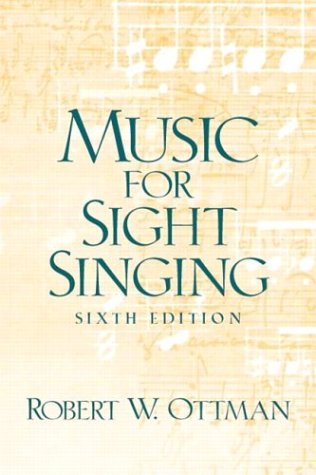 Blending step-by-step guidance with frequent practice, this book helps readers cultivate an understanding of sight singing and acquire the necessary skills to hear mentally a piece of printed music without using an instrument. Arranging its 21 chapters to study both pitch and rhythm, this book presents melodies and exercises that enable readers to develop the skills of reading pitch, reading rhythm, and combining these two essential elements. The Sixth Edition contains nearly 1200 melodies taken from a wide spectrum of music literature and the world's folk music. For professionals with a career in music, music education, and composition.

The study of sight singing is one of the most important means of developing the ability to recognize ("to hear") mentally the sound of music notation on the printed page without the necessity of recourse to a musical instrument. For the professional musician, performer, or teacher, this skill is a necessity, while for others, achievement will greatly amplify the pleasures of musical activity in performance and listening.

To achieve success in sight singing, students must have large numbers of melodies available for practice. Once a melody has been sung, repetition is no longer "singing at first sight," although reviewing for study purposes is highly recommended. To this end, this volume includes 1,199 examples. Most of these are chosen from worldwide folk sources and a wide variety of composed music, ranging from melodies simpler than Twinkle, Twinkle, Little Star to excerpts from Bartok string quartets. The remaining examples, written by the author, provide practice for rhythm alone, and for singing melodies composed only of adjacent scale steps, valuable for initial study but rarely found in music literature.

Each chapter presents only one new problem, either in rhythm or in melody, allowing students to concentrate on the newly introduced feature. Otherwise, no chapter will include any material not already presented in earlier chapters. For the dedicated student, this careful selection and grading of melodies guarantees steady and rewarding progress to a successful accomplishment of sight singing skills. Some of the changes in the new edition include:

Music for Sight Singing provides music examples for practice in accomplishing the sight singing goals described on the first page of the text. The principal objective of the study is to acquire the ability to sing a given melody at first sight. Once sung, that melody no longer qualifies to satisfy its purpose, though repetition is valuable in reviewing errors. Thus, a large number of melodies (nearly 1,200 in this volume) is desirable to provide enough practice material to accomplish the "first sight" requirement.

So that the sight singing materials will provide a musical satisfaction greater than that from routine exercises, the melodies in this text are carefully chosen from the literature of composed music and a wide range of the world's folk music. Music examples written, especially for pedagogical purposes are kept to a minimum. All materials are graded so that the student is presented with just one musical problem, rhythmic or melodic, at a time. In a given melody, only those musical elements presented in its chapter or in previous chapters will be found. To facilitate the presentation of either element—pitch or rhythm—the opening examples of each chapter will make use only of the simplest materials of the other element.

Prerequisite to the study of sight singing is a working knowledge of the basic aspects of music theory, these often taught from materials with titles such as "Introduction," "Rudiments," or "Fundamentals."1 In the area of pitch, these are especially important: (1) the ability to spell, write, and sing all major and minor scales; (2) the ability to write all major and minor key signatures; and (3) the ability to recognize the key from a given key signature. In the area of rhythm, a knowledge of note values and the interpretation of time (meter) signatures is necessary. Much of this information will be reviewed as the need occurs throughout the text. However, bringing to the opening studies a comprehensive and usable knowledge of these basic materials will guarantee more immediate accomplishment of sight-reading goals.

The text as a whole may be considered as consisting of four parts:

The principal features of previous editions remain unchanged. Improvement in this sixth edition include (1) some fifty new melodies, many in the areas of chromaticism, while considerably fewer have been deleted; (2) additional explanatory material for such subjects as "hemiola," and "Neapolitan sixth chords"; and (3) in many chapters, melodies relocated to present smoother progression from easy to difficult within the chapter.