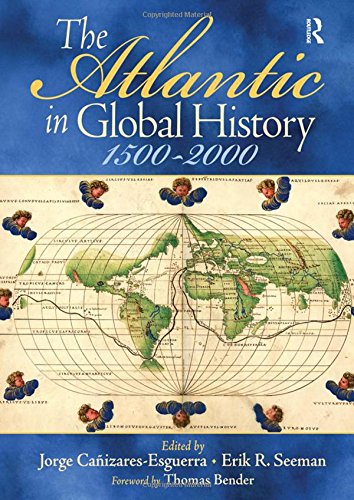 This reader, composed of original essays by leading authors, expands the category of the Atlantic chronologically, spatially, and methodologically.  It firmly places the Atlantic within global history and the coverage expands into the nineteenth and twentieth centuries.  The essays present events that formed the nations and cultures of the Atlantic region and show their global roots and how they intertwine with non-Atlantic communities of the world.

Thomas Bender is University Professor of the Humanities and Professor of History at NYU. He is the author and editor of several book, including Toward an Urban Vision: Ideas and Institutions in Nineteenth Century America (1975); Community and Social Change in America (1978); New York Intellect: A History of Intellectual Life in New York City, from 1750 to the Beginnings of Our Own Time (1987); The Anti-Slavery Debate: Capitalism and Abolitionism as a Problem in Historical Interpretation (1992); Intellect and Public Life: Essays on the Social History of Academic Intellectuals in the United States (1993); American Academic Culture in Transformation: Fifty Years, Four Disciplines (1998);Rethinking American History in a Global Age (2002); and The Unfinished City: New York and the Metropolitan Idea (2002).

Jorge Cañizares-Esguerra is Professor of History at the University of Texas at Austin.  He is the author of the prize-winning How to Write the History of the New World: History, Epistemology, and Identities in the Eighteenth-Century Atlantic World (Stanford, 2001) and has two forthcoming books with Stanford University Press: Puritan Conquistadors: Iberianizing the Atlantic 1550-1700, and Nature, Empire, and Nation: Explorations of the History of Science in the Iberian World.

Peter A. Coclanis is Albert R. Newsome Professor of History and Associate Provost for International Affairs at UNC-Chapel Hill.  He is the author of The Shadow of a Dream: Economic Life and Death in the South Carolina Low Country, 1670-1920 (Oxford, 1989), which won the Allan Nevins Prize of the Society of American Historians; The South, the Nation, and the World:  Perspectives on Southern Economic Development (Virginia, 2003); and about ninety articles.  His current project is a history of the world rice trade between c. 1600 and 1940.

Felipe Fernández-Armesto is the Principe of Asturias Chair at Tufts University.  His numerous books, which have been translated into twenty-two languages, include Before Columbus:  Exploration and Colonization from the Mediterranean to the Atlantic, 1229-1492 (Pennsylvania, 1987); Columbus (Oxford, 1991); and Millennium:  A History of the Last Thousand Years (Scribner’s, 1995).

Allan Greer is Professor of History at the University of Toronto specializing in colonial history.  His books include The People of New France (1997), Peasant, Lord, and Merchant: Rural Society in Three Quebec Parishes, 1740-1840 (1985), The Jesuit Relations: Natives and Missionaries in Seventeenth-Century North America (2000) and, with Jodi Bilinkoff, Colonial Saints: Discovering the Holy in the Americas, 1500-1800 (2003).  These works have merited several prizes, including the John A. MacDonald Prize, the Allan Sharlin Prize and the Prix Lionel-Groulx.  His current research focuses on the emergence of property regimes in colonial North America, through the interplay of European and indigenous forms of possession.

Pier M. Larson is Associate Professor of History at The Johns Hopkins University.  He is author of  History and Memory in the Age of Enslavement:  Becoming Merina in Highland Madagascar, 1770-1822 (Oxford, 2000).  His research continues along two tracks.  He is collecting personal narratives of enslavement and servitude in Africa as an entry to the continent's diverse experiences of slavery, and he is preparing a book on the translation of the Bible into Malagasy during the early nineteenth century.

Patrick F. McDevitt is Assistant Professor of History at SUNY-Buffalo.  He is the author of May the Best Man Win: Sport, Masculinity and Nationalism in Great Britain and the Empire, 1880-1935 (Palgrave Macmillan, 2004).  He is currently working on a history of progressive Catholicism in Ireland and the Atlantic world.

Kenneth Mills is Professor of History at the University of Toronto. His books include Idolatry and Its Enemies:  Colonial Andean Religion and Extirpation, 1640-1750 (Princeton, 1997) and, with William B. Taylor and Sandra Lauderdale Graham, Colonial Latin America: A Documentary History (Scholarly Resources, 2002).

Jose C. Moya is Associate Professor of History and Director of the Latin American Studies Program at UCLA.  His book Cousins and Strangers: Spanish Immigrants in Buenos Aires, 1850-1930 (California, 1998) received five awards, including the Bolton Prize for best book in Latin American History from the American Historical Association.  The journal Historical Methods published a forum on Cousins and Strangers’ theoretical and methodological contributions in its Winter 2001 issue.  Recent publications include “Immigrants and Associations: A Global and Historical Perspective,” Journal of Ethnic and Migration Studies (2004) and “The Positive Side of Stereotypes: Jewish Anarchists in Early-Twentieth-Century Buenos Aires,” Jewish History (2003).  Moya is currently working on an intellectual, social, and cultural history of the anarchist movement in Buenos Aires during the belle epoque, a project that has received support from the ACLS's Burkhardt Fellowship, the UC President's Research Fellowship in the Humanities, the NEH, and the Fulbright Fellowship.

Claudio Saunt is Associate Professor of History at the University of Georgia.  His book A New Order of Things: Property, Power, and the Transformation of the Creek Indians, 1733-1816 (Cambridge, 1999), won prizes from the Southern Historical Association and the American Society for Ethnohistory.  Race and the Graysons: Black and Indian in the South, 1780-1920, will appear from Oxford in 2005.

Claire Schen is Assistant Professor of History at SUNY-Buffalo.  She is the author of Charity and Lay Piety in Reformation London, 1500-1620 (Ashgate, 2002); “Greeks and ‘Grecians’ in London:  The ‘Other’ Strangers,” in Randolph Vigne and Charles Littleton, eds., From Strangers to Citizens: The Integration of Immigrant Communities in Britain, Ireland, and Colonial America, 1550-1750 (Brighton, 2001); and essays on women and piety.  She is currently working on a project about piracy and captivity in early modern Britain and North Africa and British relations with the Ottoman Turks in the seventeenth century.

Christopher Schmidt-Nowara is Associate Professor of History at Fordham University and Director of the Latin American and Latino Studies Institute.  He is the author of Empire and Antislavery: Spain, Cuba, and Puerto Rico, 1833-1874 (Pittsburgh, 1999) and is currently working on a monograph entitled “The Conquest of History: Spanish Colonialism and National Histories in the Nineteenth Century,” forthcoming from Pittsburgh.

Patricia Seed is Professor of History at the University of California Irvine.  She is the author of three books including, most recently, American Pentimento: The Invention of Indians and the Pursuit of Riches (Minnesota, 2001).  She has received five prizes for historical writing on a variety of different subjects. She is currently writing “The Navigation and Cartography of the Atlantic from A.D. 800 to 1600.”

Erik R. Seeman, Associate Professor of History at SUNY-Buffalo, is the author of Pious Persuasions:  Laity and Clergy in Eighteenth-Century New England (Johns Hopkins, 1999) and “Reading Indians’ Deathbed Scenes:  Ethnohistorical and Representational Approaches,” Journal of American History (2001).  He has received National Endowment for the Humanities and Fulbright fellowships to work on his current project, “Final Frontiers:  Cross-Cultural Encounters with Death in the New World.”

Reed Ueda is Professor of History at Tufts University and on the Steering Group of the Inter-University Committee on International Migration at the MIT Center for International Studies.  He is an associate of the New Global History Initiative directed by Akira Iriye of Harvard and Bruce Mazlish of MIT.  He has authored Avenues to Adulthood (Cambridge U. P., 1987) and Post- War Immigrant America (St. Martins, 1994), as well as edited books and written many articles on U. S. social history and global migration.

Jason Young received his Ph.D. from the University at California, Riverside, and is Assistant Professor of History at SUNY-Buffalo.  His current project, “Rituals of Resistance:  The Making of an African Atlantic Religious Complex in Kongo and along the Sea Islands of the Slave South,” explores the cultural connections between Africans captured in West-Central Africa and their progeny enslaved in the Lowcountry.

'The articles included in this collection are richly informative, well researched, and shed light on diverse interpretations of the Atlantic World. I have used the first edition of The Atlantic in Global History, 1500-2000 with great success in university classrooms for a decade. The editors and contributors merit praise for sharing their profound insights.'

1. THE ATLANTIC IN GLOBAL HISTORY,