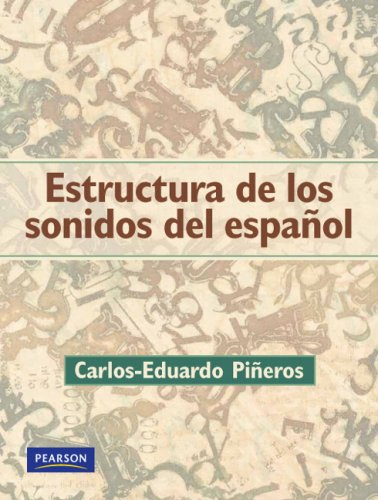 Estructura de los sonidos del espaþol provides Spanish learners with the explanations, materials, and exercises they need to develop a native-like pronunciation, and guides them through the discovery of the principles that underlie the Spanish sound system. Following a bottom-up approach, Estructuras builds progressively from simple to more intricate sound structures while emphasizing the connections that exist among different sound levels. Clear explanations and effective exercises are the hallmark features of all chapters. Estructura is most appropriate for Intro to Spanish Phonology courses. Additionally, it can be used in Spanish pronunciation for 3rd-year college students and for the Spanish phonology section of Intro to Spanish Linguistics courses.

Carlos-Eduardo Piñeros is originally from Colombia. He attended the Universidad Pedagógica Nacional in Bogotá, where he graduated as a Licenciado en Lenguas Modernas in 1990. In 1993, he moved to the United States to attend graduate school at the Ohio State University in Columbus. He completed his M.A. in 1994, and graduated with a Ph.D. in Spanish linguistics in 1998. For a year, he worked as an Assistant Professor of Spanish Linguistics for Central Michigan University in Mt. Pleasant. He then began an appointment as an Assistant Professor of Spanish Linguistics for the University of Iowa in Iowa City, and held this position until 2005, when he became a tenured Associate Professor. His work in this position involves both research and teaching in the areas of Spanish phonology, morphology, and dialectology.