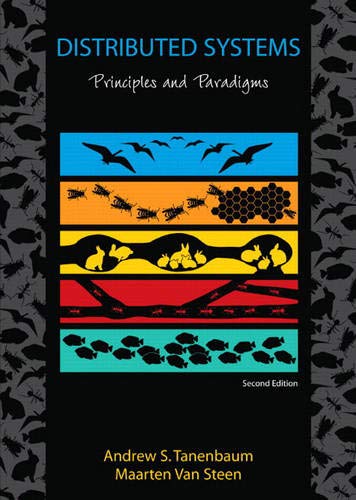 Virtually every computing system today is part of a distributed system. Programmers, developers, and engineers need to understand the underlying principles and paradigms as well as the real-world application of those principles. Now, internationally renowned expert Andrew S. Tanenbaum – with colleague Martin van Steen – presents a complete introduction that identifies the seven key principles of distributed systems, with extensive examples of each. Adds a completely new chapter on architecture to address the principle of organizing distributed systems. Provides extensive new material on peer-to-peer systems, grid computing and Web services, virtualization, and application-level multicasting. Updates material on clock synchronization, data-centric consistency, object-based distributed systems, and file systems and Web systems coordination. For all developers, software engineers, and architects who need an in-depth understanding of distributed systems.

Andrew S. Tanenbaum has a B.S. Degree from M.I.T. and a Ph.D. from the University of California at Berkeley. He is currently a Professor of Computer Science at the Vrije Universiteit in Amsterdam, The Netherlands, where he heads the Computer Systems Group. He is also Dean of the Advanced School for Computing and Imaging, an interuniversity graduate school doing research on advanced parallel, distributed, and imaging systems. Nevertheless, he is trying very hard to avoid turning into a bureaucrat.

Prof. Tanenbaum has also produced a considerable volume of software. He was the principal architect of the Amsterdam Compiler Kit, a widely-used toolkit for writing portable compilers, as well as of MINIX, a small UNIX clone intended for use in student programming labs. Together with his Ph.D. students and programmers, he helped design the Amoeba distributed operating system, a high-performance microkernel-based distributed operating system. The MINIX and Amoeba systems are now available for free via the Internet.

Maarten van Steen   is a professor at the Vrije Universiteit, Amsterdam where he teaches operating systems, computer networks, and distributed systems. He has also given various highly successful courses on computer systems related subjects to ICT professionals from industry and governmental organizations.

Prof. van Steen studied Applied Mathematics at Twente University and received a Ph.D. from Leiden University in Computer Science. After his graduate studies he went to work for an industrial research laboratory where he eventually became head of a group concentrating on programming support for parallel applications.

His current research concentrates on large-scale distributed systems. Part of his research focusses on Web-based systems, in particular adaptive distribution and replication in (collaborative) content distribution networks. Another subject of extensive research is fully decentralized (gossip based) peer-to-peer systems for wired as well as wireless ad hoc networks.

Book Description Condition: New. Brand new book. This is an international edition textbook with identical content as the US version. We ship all our orders from CA/IL, USA (depending on your address) and NOT from Asia! Buy with confidence from a 5-star US based seller. Choose expedited shipping for superfast delivery with tracking. Seller Inventory # 9780132392273

Book Description Pearson, 2006. Softcover. Condition: New. ***International Edition***Soft cover/Paperback*** Textbook printed in English. ***Brand New***. Most international edition has different ISBN and Cover design. Some book may show sales disclaimer such as "Not for Sale or Restricted in US" on the cover page but it is absolutely legal to use. All textbook arrives within 5-7business days. Please provides valid phone number with your order for easy delivery. Seller Inventory # 9780132392273