Items related to Introduction to Geotechnical Engineering, An

Introduction to Geotechnical Engineering, An 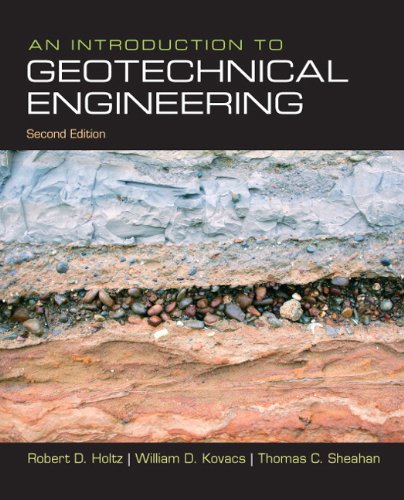 A descriptive, elementary introduction to geotechnical engineering -- with applications to civil engineering practice.

Bob Holtz, PhD, PE, D.GE, has degrees from Minnesota and Northwestern, and he attended the Special Program in Soil Mechanics at Harvard under Professor A. Casagrande. Before coming to the UW in 1988, he was on the faculty at Purdue and Cal State-Sacramento. He has worked for the California Dept. of Water Resources, Swedish Geotechnical Institute, NRC-Canada, and as a consulting engineer in Chicago, Paris, and Milano. His research interests and publications are mostly on geosynthetics, soil improvement, foundations, and soil properties. He is author, co-author, or editor of 23 books and book chapters, as well as more than 270 technical papers, discussions, reviews, and major reports.

Professor Holtz is a Distinguished Member of ASCE, was President of the ASCE Geo-Institute 2000-1, and currently serves as the International Secretary for the Geo-Institute. He is a Member Emeritus of TRB Committee on Soil and Rock Properties, a Past President of North American Geosynthetics Society; and a member of several other professional and technical organizations. He has taught numerous short courses and given many presentations at seminars and conferences, both in the U.S. and abroad. In 2010 he was named the 46th Karl Terzaghi Lecturer, which has been presented at several US venues and in Brazil, China, and Canada. In 2008, he was named the Puget Sound Academic Engineer of the Year.

Throughout his academic career, Professor Holtz has had an active consulting practice, involving geosynthetics, foundations, soil reinforcing, soil improvement, properties and containment of nuclear wastes, slope stability and landslides, investigation of failures, and acting as an expert witness. His clients have included federal, state, and local public agencies, civil and geotechnical engineering consultants and contractors, attorneys, and manufacturers, both in North America and overseas.

William D. Kovacs, F. ASCE, Professor of Civil and Environmental Engineering Professor and former Chairman of the Department of Civil and Environmental Engineering from 1984 to 1990, Dr. Kovacs has conducted sponsored research under the aegis of the National Science Foundation (NSF), the United States National Bureau of Standards (USNBS), the Bureau of Reclamation (USBR), the Naval Facilities Command (NAVFAC), the United States Geological Survey (USGS), and the United States Army Corps of Engineers (USACOE). He is the author and co-author of over sixty-five publications. A registered professional engineer, a member of the Chi Epsilon Civil Engineering Honor Society, and a recipient of predoctoral grants in 1967 and 1968, Dr. Kovacs’ geotechnical engineering research interests focus on: In Situ Testing; Foundation Engineering; Dynamic Soil Property Evaluation; and Earthquake Engineering

Thomas C. Sheahan is a Professor and the Senior Associate Dean for Academic Affairs in the Department of Civil and Environmental Engineering at Northeastern University. Dr. Sheahan received his Sc.D. in Civil Engineering from M.I.T., his M.S. in Civil Engineering from M.I.T., and his B.S. in Civil Engineering from Union College.Dr. Sheahan's areas of expertise include: Rate Effects in Soils; Offshore Geohazards; Sampling Disturbance Effects; and Laboratory Instrumentation. He is licensed as a professional engineer in California and Massachusetts. Among his most recent honors and awards are the Northeastern College of Engineering Dean’s Meritorious Service Award (2009), the ASTM Committee D-18, Special Service Award (2009), the ASTM Committee on Publications, Certificate of Appreciation (2008), and the Tau Beta Pi National Capers and Marion McDonald Mentoring Award (2007).

Book Description Pearson, 2010. Condition: New. Brand new book. This is an international edition textbook with identical content as the US version and is usually paperback bound instead of hardcover. We ship all our orders from CA/IL, USA (depending on your address) and NOT from Asia! Buy with confidence from a 5-star US based seller. Choose expedited shipping for superfast delivery with tracking. Seller Inventory # 712|9780132496346

2. An Introduction to Geotechnical Engineering, 2/e

Book Description Pearson, 2010. soft cover. Condition: New. International Edition. No supplemental materials. International Editions may have a different cover or ISBN but generally have the exact same content as the US edition, just at a more affordable price. In some cases, end of chapter questions may vary slightly from the US edition. International Editions are typically printed in grayscale, and likely will not have any color throughout the book. New. Books ship from multiple locations depending on availability. All orders are shipped with tracking information. We take pride in our customer service. Please contact us if you have any questions regarding this listing. Seller Inventory # 10776

Book Description Prentice Hall, 2010. Softcover. Condition: New. ***International Edition***Soft cover/Paperback*** Textbook printed in English. ***Brand New***. Most international edition has different ISBN and Cover design. Some book may show sales disclaimer such as "Not for Sale or Restricted in US" on the cover page but it is absolutely legal to use. All textbook arrives within 5-7business days. Please provides valid phone number with your order for easy delivery. Seller Inventory # 9780132496346

6. Introduction to Geotechnical Engineering, An

7. Introduction to Geotechnical Engineering, An (Paperback)

8. Introduction to Geotechnical Engineering, An (Paperback)

9. Introduction to Geotechnical Engineering, An