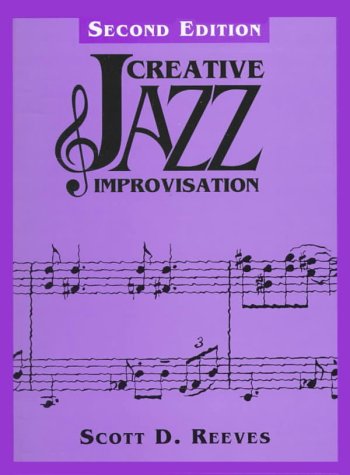 This well-organized book combines all of the techniques that jazz musicians practice into a comprehensive whole. It covers practice patterns and scales in all keys and tempos, transcribing solos of master improvisers, learning the jazz repertoire, and playing with other musicians. Chapter topics include how to practice, creatively improvise, and teach improvisation; major innovators; important contributors; women in jazz; chord substitutions; scales; and form. Each chapter also contains theory and ear exercises.

This book covers practice patterns and scales in all keys and tempos, transcribing solos of master improvisors, learning the jazz repertoire, and playing with other musicians. Students and professionals at any level of proficiency will find the material beneficial. The text may be applied to any instrument, or a classroom of varied instrumentation.

It is gratifying that, since the publication of the first edition in 1989 and the second in 1995, many college educators, private instructors, and students of jazz have found Creative Jazz Improvisation to be a valuable aid in their musical growth. This text is a direct outgrowth of over twenty-one years of experiences teaching jazz improvisation at the college level, as well as my own personal quest to develop as a jazz artist.

I believe there is a direct parallel between life and art. The pursuit of understanding in any art form can teach us much about ourselves and serve as a catalyst for a lifetime of learning. My own musical perspectives have evolved since the second edition of this text was written, and much of this new information has been incorporated into the present volume. Therefore, I believe this edition to be much more than a minor reworking of the previous one. However, all of the same features that made Creative Jazz Improvisation a popular choice for classroom use are retained, including:

The philosophy that there are several paths to the same goal and that each student learns in his or her own unique way. An orientation in difficulty toward college-level and intermediate-to-advanced musicians. For students at the high-school or community college level or adult beginners, I strongly recommend the entry-level companion to this text, Creative Beginnings, which comes with a play-along compact disc. The division of the majority of chapters into sections devoted to jazz theory, exercises over a specified chord progression, a list of relevant compositions, and a transcribed solo which has been transposed and edited for concert pitch treble clef, B6, E6 and bass clef instruments. A thorough discussion of all facets of jazz theory, including major scale modes, forms and chord substitutions, melodic minor modes, diminished and whole-tone scales, pentatonic scales, and intervallic and "free" improvisation. The keying of the chord progressions to either the widespread Jamey Aebersold series or the compact disc accompanying Creative Beginnings. Exercises that include not only basic scales and arpeggios but also melodic ideas taken directly from cited recordings by master improvisers, arranged in order of relative difficulty. The indexing of the list of compositions to legal fake-books, particularly the New Real Book and the Aebersold play-along series. The correlation of half of the transcribed solos with the widely available anthology, The Smithsonian Collection of Classic Jazz. The convenience of allowing a classroom of mixed instrumentation to work simultaneously from the text.

Differences between the second and third editions include:

The addition of a new chapter, "Whom to Listen To," which lists major innovators, important contributors, and women in jazz. The expansion of the chapter on "Rhythm," with considerable new information and exercises. Replacement of two transcriptions with more readily playable examples, including Miles Davis's "Solea" solo (in place of Wayne Shorter's "Masqualero" solo), and Bill Evans's "Autumn Leaves" solo (in lieu of Dizzy Gillespie's "Stardust" solo). In addition, J. J. Johnson's solo on "Aquarius" has been renotated in long meter to make it easier to read. An expansion of the list of compositions in each chapter to reflect the ever-increasing number of play-along recordings by Jamey Aebersold. The third edition is now keyed to the first eighty-five volumes in his series, A New Approach to Jazz Improvisation. An extensive reworking of all portions of the text to improve readability and reflect recent information. A reappraisal of all exercises, with selected replacements and additions. The incorporation of inspirational epigraphs at the beginning of each chapter. A continued investigation of the how to bridge the gap between the technical and intellectual aspects of jazz with the creative and intuitive state of mind. Many of these ideas may be traced to my exposure to the concepts of pianist Kenny Werner, and I am indebted to his willingness to allow me to incorporate some of his ideas into this volume.

This text reflects the influences of my previous teachers, particularly David Baker, Woody Shaw, and Kenny Werner, the many jazz artists whose work I have studied and transcribed, and the pedagogical concepts of Jamey Aebersold. I gratefully acknowledge these people, as well as the staff at Prentice Hall, particularly my acquisitions editor, Christopher Johnson and my production and copy editor, Laura Lawrie. I sincerely hope the readers of this text will find it a valuable aid in their growth as musicians.

Book Description Prentice Hall, 1995. Condition: Good. 2nd Edition. Shows some signs of wear, and may have some markings on the inside. Seller Inventory # GRP65391798

Book Description Condition: Acceptable. May have some shelf-wear due to normal use. Seller Inventory # 0KVKX6002OIB