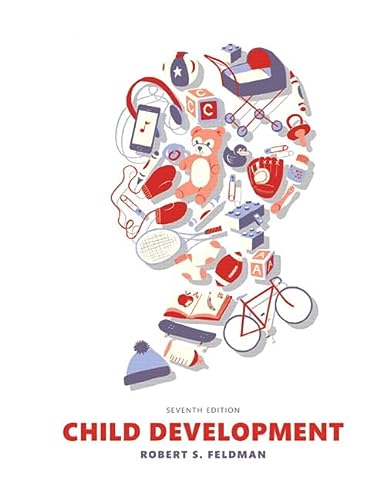 NOTE: You are purchasing a standalone product; MyPsychLab® does not come packaged with this content. If you would like to purchase both the physical text and MyPsychLab search for 0134130472 / 9780134130477   Child Development plus MyPsychLab with eText — Access Card Package, 7/e

MyPsychLab should only be purchased when required by an instructor.

For courses in Child Development which take a chronological approach

A balanced presentation of developmental theory, research, and applications
Child Development, Seventh Edition offers students a balanced, up-to-date overview of developmental theory and research with a focus on application to students’ personal lives and future careers. Organized chronologically, the text features a variety of student-focused tools that make the study of development interesting and engaging. Author Robert Feldman’s emphasis on practical, take-home information provides students with knowledge they can use during the course and beyond.

Also available with MyPsychLab®
This title is also available with MyPsychLab – an online homework, tutorial, and assessment program designed to work with this text to engage students and improve results. Within its structured environment, students practice what they learn, test their understanding, and pursue a personalized study plan that helps them better absorb course material and understand difficult concepts. Students, if interested in purchasing this title with MyPsychLab, ask your instructor for the correct package ISBN and Course ID. Instructors, contact your Pearson representative for more information.

Robert S. Feldman is Professor of Psychological and Brain Sciences and Deputy Chancellor of the University of Massachusetts Amherst. A recipient of the College Distinguished Teacher Award, he teaches classes ranging in size from 10 to nearly 500 students. During the course of more than two decades as a college instructor, he has taught both undergraduate and graduate courses at Mount Holyoke College, Wesleyan University, and Virginia Commonwealth University in addition to the University of Massachusetts Amherst.

A Fellow of both the American Psychological Association and the Association for Psychological Science, Professor Feldman received a B.A. with High Honors from Wesleyan University (and from which he received the Distinguished Alumni Award). He has an MS and Ph.D. from the University of Wisconsin-Madison. He is a winner of a Fulbright Senior Research Scholar and Lecturer award, and he has written more than 200 books, book chapters, and scientific articles. He has edited Development of Nonverbal Behavior in Children (Springer-Verlag) and Applications of Nonverbal Behavioral Theory and Research (Erlbaum), and co-edited Fundamentals of Nonverbal Behavior (Cambridge University Press). He is also author of Development Across the Life Span, Understanding Psychology, and P.O.W.E.R. Learning: Strategies for Success in College and Life. His books have been translated into many languages, including Spanish, French, Portuguese, Dutch, Chinese, Korean, German, Arabic, Tagalog, and Japanese, and more than 2.5 million students have used his textbooks.

Professor Feldman’s research interests include honesty and deception in everyday life, work that he described in The Liar in Your Life, a trade book published in 2009. His research has been supported by grants from the National Institute of Mental Health and the National Institute on Disabilities and Rehabilitation Research.  He is also president of the Federation of Associations in the Behavioral and Brain Sciences Foundation, an organization that promotes the social sciences, and a member of the board of New England Public Radio.

Professor Feldman loves music, is an enthusiastic pianist, and enjoys cooking and traveling. He has three children and two young grandsons. He and his wife, a psychologist, live in western Massachusetts in a home overlooking the Holyoke Mountain Range.

Book Description Condition: New. Brand New Paperback International Edition.We Ship to PO BOX Address also. EXPEDITED shipping option also available for faster delivery.This item may ship from the US or other locations in India depending on your location and availability. Seller Inventory # ABBUN-90664

Book Description soft cover. Condition: New. International Edition. No supplemental materials. International Editions may have a different cover or ISBN but generally have the exact same content as the US edition, just at a more affordable price. In some cases, end of chapter questions may vary slightly from the US edition. International Editions are typically printed in grayscale, and likely will not have any color throughout the book. New. Books ship from multiple locations depending on availability. All orders are shipped with tracking information. We take pride in our customer service. Please contact us if you have any questions regarding this listing. Seller Inventory # 11295