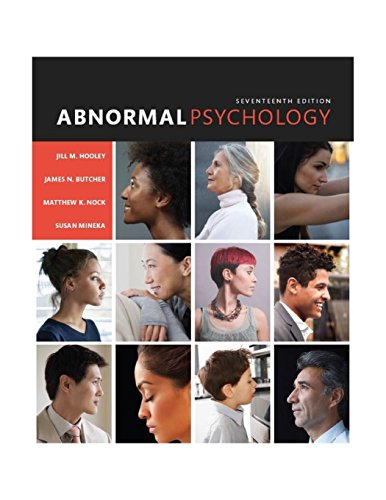 For courses in Abnormal Psychology

A comprehensive overview of abnormal psychology, with DSM-5 coverage throughout
Abnormal Psychology provides a comprehensive and engaging introduction to the primary psychological disorders studied within the discipline. Maintaining a focus on the individuals at the heart of the study of abnormal psychology, the authors employ a biopsychosocial approach that helps students achieve an understanding of the holistic context in which abnormalities of behavior occur. In addition to the contributions of new co-author Matthew Nock, the Seventeenth Edition has been extensively updated to reflect DSM-5 diagnostic categories, classifications, and criteria.

Also available with MyPsychLab®
This title is also available with MyPsychLab — an online homework, tutorial, and assessment program designed to work with this text to engage students and improve results. Within its structured environment, students practice what they learn, test their understanding, and pursue a personalized study plan that helps them better absorb course material and understand difficult concepts. Students, if interested in purchasing this title with MyPsychLab, ask your instructor for the correct package ISBN and Course ID. Instructors, contact your Pearson representative for more information.

Abnormal Psychology, Seventeenth Edition is also available via REVEL™, an interactive learning environment that enables students to read, practice, and study in one continuous experience.

Note: You are purchasing a standalone product; MyLab™ & Mastering™ does not come packaged with this content. Students, if interested in purchasing this title with MyLab & Mastering, ask your instructor for the correct package ISBN and Course ID. Instructors, contact your Pearson representative for more information.

James N. Butcher was born in West Virginia. He enlisted in the army when he was 17 years old and served in the airborne infantry for 3 years, including a 1-year tour in Korea during the Korean War. After military service, he attended Guilford College, graduating in 1960 with a BA in psychology. He received an MA in experimental psychology in 1962 and a PhD in clinical psychology from the University of North Carolina at Chapel Hill. He was awarded Doctor Honoris Causa from the Free University of Brussels, Belgium, in 1990 and an honorary doctorate from the University of Florence, Florence, Italy, in 2005. He is currently professor emeritus in the Department of Psychology at the University of Minnesota. He was associate director and director of the clinical psychology program at the university for 19 years. He was a member of the University of Minnesota Press’s MMPI Consultative Committee, which undertook the revision of the MMPI in 1989. He was formerly the editor of Psychological Assessment, a journal of the American Psychological Association, and serves as consulting editor or reviewer for numerous other journals in psychology and psychiatry. Dr. Butcher was actively involved in developing and organizing disaster response programs for dealing with human problems following airline disasters during his career. He organized a model crisis intervention disaster response for the Minneapolis-St. Paul Airport and organized and supervised the psychological services offered following two major airline disasters: Northwest Flight 255 in Detroit, Michigan, and Aloha Airlines on Maui. He is a fellow of the Society for Personality Assessment. He has published 60 books and more than 250 articles in the fields of abnormal psychology, cross-cultural psychology, and personality assessment.

Jill M. Hooley is a professor of psychology at Harvard University. She is also the head of the experimental psychopathology and clinical psychology program at Harvard. Dr. Hooley was born in England and received a BSc in psychology from the University of Liverpool. This was followed by research work at Cambridge University. She then attended Magdalen College, Oxford, where she completed her DPhil. After a move to the United States and additional training in clinical psychology at SUNY Stony Brook, Dr. Hooley took a position at Harvard, where she has been a faculty member since 1985.

Dr. Hooley has a long-standing interest in psychosocial predictors of psychiatric relapse in patients with severe psychopathology such as schizophrenia and depression. Her research has been supported by grants from the National Institute of Mental Health and by the Borderline Personality Disorder Research Foundation. She uses fMRI to study emotion regulation in people who are vulnerable to depression and in people who are suffering from borderline personality disorder. Another area of research interest is nonsuicidal self-harming behaviors such as skin cutting or burning.

At Harvard, Dr. Hooley has taught graduate and undergraduate classes in introductory psychology, abnormal psychology, schizophrenia, mood disorders, clinical psychology, psychiatric diagnosis, and psychological treatment. Reflecting her commitment to the scientist-practitioner model, she also does clinical work specializing in the treatment of people with depression, anxiety disorders, and personality disorders.

Matthew Nock was born and raised in New Jersey. Matt received his BA from Boston University (1995), followed by two masters (2000, 2001) and a PhD from Yale University (2003). He also completed a clinical internship at Bellevue Hospital and the New York University Child Study Center (2003). Matt joined the faculty of Harvard University in 2003 and has been there ever since, currently serving as a Professor in the Department of Psychology. While an undergraduate, Matt became very interested in the question of why people do things to intentionally harm themselves and he has been conducting research aimed at answering this question ever since. His research is multidisciplinary in nature and uses a range of methodological approaches (e.g., epidemiologic surveys, laboratory-based experiments, and clinic-based studies) to better understand how these behaviors develop, how to predict them, and how to prevent their occurrence. His work is funded by research grants from the National Institutes of Health, Department of Defense, and several private foundations. Matt’s research has been published in over 100 scientific papers and book chapters and has been recognized through the receipt of awards from the American Psychological Association, the Association for Behavioral and Cognitive Therapies, and the American Association of Suicidology. In 2011 he received a MacArthur Fellowship (aka, “Genius Grant”) in recognition of his research on suicide and self-harm. At Harvard, Matt teaches courses on various topics including psychopathology, statistics, research methods, and cultural diversity. He has received numerous teaching and mentoring awards including the Roslyn Abramson Teaching Award and the Petra Shattuck Prize.

Susan Mineka, born and raised in Ithaca, New York, received her undergraduate degree magna cum laude in psychology at Cornell University. She received a PhD in experimental psychology from the University of Pennsylvania and later completed a formal clinical retraining program from 1981 to 1984. She taught at the University of Wisconsin—Madison and at the University of Texas at Austin before moving to Northwestern University in 1987. Since 1987 she has been a professor of psychology at Northwestern, and from 1998 to 2006 she served as director of clinical training there. She has taught a wide range of undergraduate and graduate courses, including introductory psychology, learning, motivation, abnormal psychology, and cognitive-behavior therapy. Her current research interests include cognitive and behavioral approaches to understanding the etiology, maintenance, and treatment of anxiety and mood disorders. She is currently a Fellow of the American Psychological Association, the American Psychological Society, and the Academy of Cognitive Therapy. She has served as editor of the Journal of Abnormal Psychology (1990—1994). She also served as associate editor for Emotion from 2002 to 2006 and is on the editorial boards of several of the leading journals in the field. She was also president of the Society for the Science of Clinical Psychology (1994—1995) and was president of the Midwestern Psychological Association (1997). She also served on the American Psychological Association’s Board of Scientific Affairs (1992—1994, chair 1994), on the Executive Board of the Society for Research in Psychopathology (1992—1994, 2000—2003), and on the Board of Directors of the American Psychological Society (2001—2004). During 1997 and 1998 she was a fellow at the Center for Advanced Study in the Behavioral Sciences at Stanford.

Book Description Pearson, 2016. Condition: New. Brand new book. This is an international edition textbook with identical content as the US version and is usually paperback bound instead of hardcover. We ship all our orders from CA/IL, USA (depending on your address) and NOT from Asia! Buy with confidence from a 5-star US based seller. Choose expedited shipping for superfast delivery with tracking. Seller Inventory # 289|9780133852059

Book Description Pearson, 2016. Softcover. Condition: New. ***International Edition***Soft cover/Paperback*** Textbook printed in English. ***Brand New***. Most international edition has different ISBN and Cover design. Some book may show sales disclaimer such as "Not for Sale or Restricted in US" on the cover page but it is absolutely legal to use. All textbook arrives within 5-7business days. Please provides validphone number with your order for easy delivery. Seller Inventory # g0133852059

Book Description Pearson, 2016. soft cover. Condition: New. International Edition. No supplemental materials. International Editions may have a different cover or ISBN but generally have the exact same content as the US edition, just at a more affordable price. In some cases, end of chapter questions may vary slightly from the US edition. International Editions are typically printed in grayscale, and likely will not have any color throughout the book. New. Books ship from multiple locations depending on availability. All orders are shipped with tracking information. We take pride in our customer service. Please contact us if you have any questions regarding this listing. Seller Inventory # 11296