Items related to The Struggle for Democracy 2014: Elections Edition

The Struggle for Democracy 2014: Elections Edition 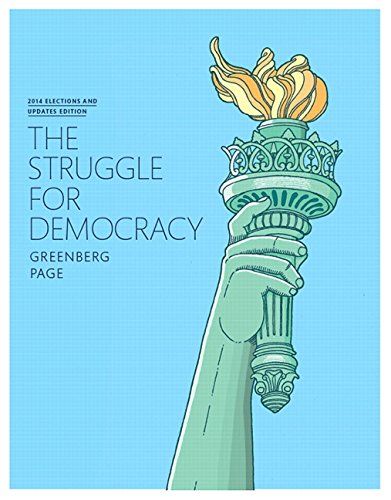 Minimally bent or worn edges. Little or no marking inside book.

Edward S. Greenberg is Professor Emeritus of Political Science and a Research Professor of Behavioral Science at the University of Colorado, Boulder. Ed’s research and teaching interests include American government and politics, domestic and global political economy, and democratic theory and practice, with a special emphasis on workplace issues. His multi-year longitudinal panel study, funded by the NIH, examining the impact of corporate restructuring on employees, has recently been published and is now being revised and updated.

Benjamin I. Page is the Gordon S. Fulcher Professor of Decision Making at Northwestern University in Evanston, Illinois. Ben’s interests include public opinion and policy making, the mass media, empirical democratic theory, political economy, policy formation, the presidency, and American foreign policy. He is currently engaged in a large collaborative project to study economically successful Americans and the common good and the rise and political consequences of income and wealth inequality in the United States.

1. Struggle for Democracy, The, 2014 Elections and Updates Edition (11th Edition)