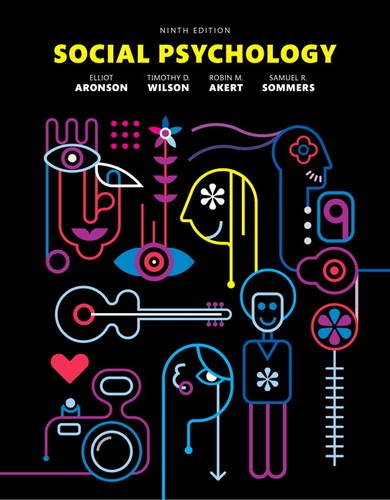 NOTE: You are purchasing a standalone product; MyPsychLab does not come packaged with this content. If you would like to purchase both the physical text and MyPsychLab, search for 0134131037 / 9780134131030 Social Psychology plus MyPsychLab with eText — Access Card Package, 9/e

MyPsychLab should only be purchased when required by an instructor.

For courses in Social Psychology

Make research relevant through a storytelling approach.
Social Psychology introduces the key concepts of the field through an acclaimed storytelling approach that makes research relevant to students. Drawing upon their extensive experience as researchers and teachers, Elliot Aronson, Tim Wilson, Robin Akert, and new co-author Sam Sommers present the classic studies that have driven the discipline alongside the cutting-edge research that is the future of social psychology.

Also available with MyPsychLab®
This title is also available with MyPsychLab – an online homework, tutorial, and assessment program designed to work with this text to engage students and improve results. Within its structured environment, students practice what they learn, test their understanding, and pursue a personalized study plan that helps them better absorb course material and understand difficult concepts. Students, if interested in purchasing this title with MyPsychLab, ask your instructor for the correct package ISBN and Course ID. Instructors, contact your Pearson representative for more information.

Elliot Aronson is Professor Emeritus at the University of California at Santa Cruz and one of the most renowned social psychologists in the world. In 2002, he was chosen as one of the 100 most eminent psychologists of the twentieth century. Dr. Aronson is the only person in the 120-year history of the American Psychological Association to have received all three of its major awards: for distinguished writing, distinguished teaching, and distinguished research. Many other professional societies have honored his research and teaching as well. These include the American Association for the Advancement of Science, which gave him its highest honor, the Distinguished Scientific Research award; the American Council for the Advancement and Support of Education, which named him Professor of the Year of 1989; the Society for the Psychological Study of Social Issues, which awarded him the Gordon Allport prize for his contributions to the reduction of prejudice among racial and ethnic groups; and the William James Award from the Association for Psychological Science. In 1992, he was named a Fellow of the American Academy of Arts and Sciences. A collection of papers and tributes by his former students and colleagues, The Scientist and the Humanist, celebrates his contributions to social psychological theory and its application to real-world problems. Dr. Aronson’s own recent books for general audiences include Mistakes Were Made (but not by ME), with Carol Tavris, and a memoir, Not by Chance Alone: My Life as a Social Psychologist.

Sam Sommers earned his B.A. from Williams College and his Ph.D. from the University of Michigan. Since 2003 he has been a faculty member in the Department of Psychology at Tufts University in Medford, Massachusetts. His research examines issues related to stereotyping, prejudice, and group diversity, with a particular interest in how these processes play out in the legal domain. He has won multiple teaching awards at Tufts, including the Lerman-Neubauer Prize for Outstanding Teaching and Advising and the Gerald R. Gill Professor of the Year Award. He was also inducted into the Tufts Hall of Diversity for his efforts to promote an inclusive climate on campus for all students. He has testified as an expert witness on issues related to racial bias, jury decision-making, and eyewitness memory in criminal trial proceedings in seven states. His first general audience book on social psychology was published in 2011, titled Situations Matter: Understanding How Context Transforms Your World. His next book, titled Your Brain on Sports, is co-authored with L. Jon Wertheim of Sports Illustrated and will be published in early 2016.

Book Description Pearson, 2015. soft cover. Condition: New. International Edition. No supplemental materials. International Editions may have a different cover or ISBN but generally have the exact same content as the US edition, just at a more affordable price. In some cases, end of chapter questions may vary slightly from the US edition. International Editions are typically printed in grayscale, and likely will not have any color throughout the book. New. Books ship from multiple locations depending on availability. All orders are shipped with tracking information. We take pride in our customer service. Please contact us if you have any questions regarding this listing. Seller Inventory # 11328