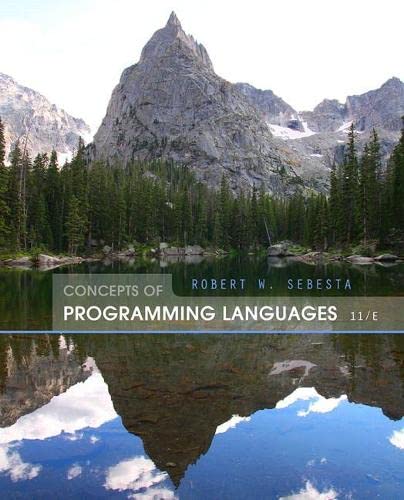 For courses in computer programming.

Concepts of Computer Programming Languages introduces students to the fundamental concepts of computer programming languages and provides them with the tools necessary to evaluate contemporary and future languages. An in-depth discussion of programming language structures, such as syntax and lexical and syntactic analysis, also prepares readers to study compiler design.


The Eleventh Edition maintains an up-to-date discussion on the topic with the removal of outdated languages such as Ada and Fortran. The addition of relevant new topics and examples such as reflection and exception handling in Python and Ruby add to the currency of the text. Through a critical analysis of design issues of various program languages, Concepts of Computer Programming Languages teaches programmers the essential differences between computing with specific languages.

Robert Sebesta is an Associate Professor Emeritus in the Computer Science Department at the University of Colorado–Colorado Springs. Professor Sebesta received a BS in applied mathematics from the University of Colorado in Boulder and MS and PhD degrees in computer science from Pennsylvania State University. He has taught computer science for more than 40 years. His professional interests are the design and evaluation of programming languages and Web programming.

Book Description Pearson, 2015. Condition: New. Brand new book. This is an international edition textbook with identical content as the US version and is usually paperback bound instead of hardcover. We ship all our orders from CA/IL, USA (depending on your address) and NOT from Asia! Buy with confidence from a 5-star US based seller. Choose expedited shipping for superfast delivery with tracking. Seller Inventory # 1122|9780133943023

Book Description Pearson, 2015. Soft cover. Condition: New. Brand New International Edition textbook. Some book may show sales disclaimer such as "Not for Sale or Restricted in US" on the cover page but it is absolutely legal to use in US or Canada. Ship from Multiple Locations, including Asia , Hong Kong ,Taiwan , US or Canada depend on stock location. Seller Inventory # 000593

Book Description Pearson, 2015. soft cover. Condition: New. International Edition. No supplemental materials. International Editions may have a different cover or ISBN but generally have the exact same content as the US edition, just at a more affordable price. In some cases, end of chapter questions may vary slightly from the US edition. International Editions are typically printed in grayscale, and likely will not have any color throughout the book. New. Books ship from multiple locations depending on availability. All orders are shipped with tracking information. We take pride in our customer service. Please contact us if you have any questions regarding this listing. Seller Inventory # 11334

Book Description Pearson, 2015. Softcover. Condition: New. ***International Edition***Soft cover/Paperback*** Textbook printed in English. ***Brand New***. Most international edition has different ISBN and Cover design. Some book may show sales disclaimer such as "Not for Sale or Restricted in US" on the cover page but it is absolutely legal to use. All textbook arrives within 5-7business days. Please provides valid phone number with your order for easy delivery. Seller Inventory # dp9780133943023