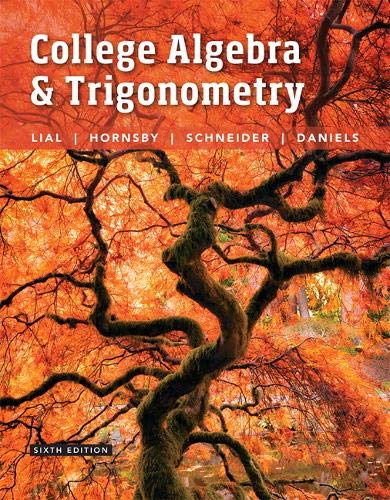 For courses in college algebra and trigonometry.
Steadfast Support for your Evolving Course

The College Algebra series, by Lial, Hornsby, Schneider, and Daniels, combines the experience of master teachers to help students develop both the conceptual understanding and the analytical skills necessary for success in mathematics. With this latest edition, the authors respond to the challenges of new student expectations and new classroom models. The Lial team is now offering a new suite of resources to support today’s instructors and students.

Note: You are purchasing a standalone product; MyMathLab does not come packaged with this content. Students, if interested in purchasing this title with MyMathLab, ask your instructor for the correct package ISBN and Course ID. Instructors, contact your Pearson representative for more information.

If you would like to purchase both the physical text and MyMathLab, search for:

Marge Lial (late) was always interested in math; it was her favorite subject in the first grade! Her desire to educate both her students and herself inspired the writing of numerous best-selling textbooks. Marge, who received Bachelor's and Master's degrees from California State University at Sacramento, was most recently affiliated with American River College. An avid reader and traveler, Marge’s travel experiences often find their way into her books as applications, exercise sets, and feature sets. She was particularly interested in archeology. Trips to various digs and ruin sites produced some fascinating problems for her textbooks, involving such topics as the building of Mayan pyramids and the acoustics of ancient ball courts in the Yucatan.

When John Hornsby enrolled as an undergraduate at Louisiana State University, he was uncertain whether he wanted to study mathematics education or journalism. His ultimate decision was to become a teacher, and now after more than twenty-five years of teaching at the high school and university levels and fifteen years of writing mathematics textbooks, both of his goals have been realized. His love for both teaching andmathematics is evident in his passion for working with students and fellow teachers as well. His specific professional interests are recreational mathematics, mathematics history, and incorporating graphing calculators into the curriculum. John's personal life is busy, as he devotes time to his family (wife Gwen, and sons Chris, Jack, and Josh). He has been a rabid baseball fan all of his life. John's other hobbies include numismatics (the study of coins) and record collecting. He loves the music of the 1960s and has an extensive collection of the recorded works of Frankie Valli and the Four Seasons.

David Schneider has taught mathematics at universities for more than 34 years and has authored 36 books. He has an undergraduate degree in mathematics from Oberlin College and a PhD in mathematics from MIT. During most of his professional career, he was on the faculty of the University of Maryland—College Park. His hobbies include travel, dancing, bicycling, and hiking.

Callie Daniels has always had a passion for learning mathematics and brings that passion into the classroom with her students. She attended the University of the Ozarks on an athletic scholarship, playing both basketball and tennis. While there, she earned a Bachelor’s degree in Secondary Mathematics Education as well as the NAIA Academic All-American Award. She has two Master’s degrees: one in Applied Mathematics and Statistics from the University of Missouri—Rolla, the second in Adult Education from the University of Missouri—St. Louis. Her hobbies include watching her sons play sports, riding horses, fishing, shooting photographs, and playing guitar. Her professional interests include improving success in the community college mathematics sequence, using technology to enhance students’ understanding of mathematics, and creating materials that support classroom teaching and student understanding.

Book Description Pearson, 2016. Soft cover. Condition: New. 5th or later Edition. Brand New International Edition textbook. Some book may show sales disclaimer such as "Not for Sale or Restricted in US" on the cover page but it is absolutely legal to use in US or Canada. Ship from Multiple Locations, including Asia , Hong Kong ,Taiwan , US or Canada depend on stock location. Seller Inventory # 000695

Book Description Pearson, 2016. Hardcover. Condition: New. $$$***READ THIS PLS.*** $$$ Teacher's Edition (same contents as the student edition plus extra material). Marked Not for Resale with disclaimer. New and in great condition with no missing or damaged pages. Need it urgently? Upgrade to Expedited. In stock and we ship daily on weekdays & Saturdays. Seller Inventory # u3vy