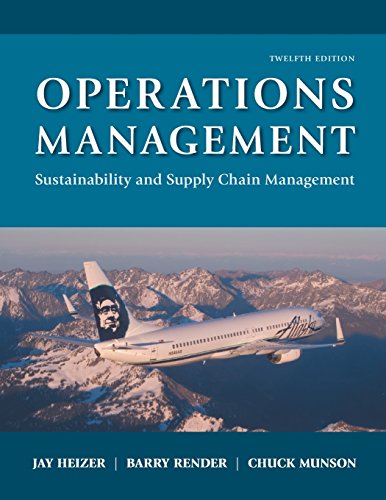 For courses in Operations Management.

A broad, practical introduction to operations, reinforced with an extensive collection of practice problems

Operations Management: Sustainability and Supply Chain Management presents a broad introduction to the field of operations in a realistic and practical manner, while offering the largest and most diverse collection of issues on the market. Problems found in the Twelfth Edition contain ample support–found in the book’s solved-problems and worked examples–to help readers better understand concepts important to today’s operations management professionals.

For a briefer version without the business analytic modules at the end of the text, see Heizer/Render/Munson’s Principles of Operations Management: Sustainability and Supply Chain Management, 10e (0134181980 / 9780134181981).

This title is also available with MyOMLab—an online homework, tutorial, and assessment program designed to work with this text to engage students and improve results. Within its structured environment, students practice what they learn, test their understanding, and pursue a personalized study plan that helps them better absorb course material and understand difficult concepts.


Note: You are purchasing a standalone product; MyOMLab does not come packaged with this content. Students, if interested in purchasing this title with MyOMLab, ask your instructor for the correct package ISBN and Course ID. Instructors, contact your Pearson representative for more information.


If you would like to purchase both the physical text and MyOMLab, search for:

Professor Emeritus, the Jesse H. Jones Chair of Business Administration, Texas Lutheran University, Seguin, Texas. He received his B.B.A. and M.B.A. from the University of North Texas and his Ph.D. in Management and Statistics from Arizona State University.

Dr. Heizer’s industrial experience is extensive. He learned the practical side of operations management as a machinist apprentice at Foringer and Company, as a production planner for Westinghouse Airbrake, and at General Dynamics, where he worked in engineering administration. In addition, he has been actively involved in consulting in the OM and MIS areas for a variety of organizations, including Philip Morris, Firestone, Dixie Container Corporation, Columbia Industries, and Tenneco. He holds the CPIM certification from APICS–the Association for Operations Management.

Professor Heizer has co-authored 5 books and has published more than 30 articles on a variety of management topics. His papers have appeared in the Academy of Management Journal, Journal of Purchasing, Personnel Psychology, Production & Inventory Control Management, APICS–The Performance Advantage, Journal of Management History, IIE Solutions, and Engineering Management, among others. He has taught operations management courses in undergraduate, graduate, and executive programs.

Professor Emeritus, the Charles Harwood Professor of Operations Management, Crummer Graduate School of Business, Rollins College, Winter Park, Florida. He received his B.S. in Mathematics and Physics at Roosevelt University, and his M.S. in Operations Research and Ph.D. in Quantitative Analysis at the University of Cincinnati.

Dr. Render has been honored as an AACSB Fellow and was twice named a Senior Fulbright Scholar. He was Vice President of the Decision Science Institute Southeast Region and served as Software Review Editor for Decision Line for six years and as Editor of the New York Times Operations Management special issues for five years. From 1984 to 1993, Dr. Render was President of Management Service Associates of Virginia, Inc., whose technology clients included the FBI, the U.S. Navy, Fairfax County, Virginia, and C&P Telephone. He is currently Consulting Editor to Financial Times Press.

Dr. Render has taught operations management courses in Rollins College’s MBA and Executive MBA programs. He has received that school’s Welsh Award as leading Professor and was selected by Roosevelt University as the 1996 recipient of the St. Claire Drake Award for Outstanding Scholarship. In 2005, Dr. Render received the Rollins College MBA Student Award for Best Overall Course, and in 2009 was named

Professor of the Year by full-time MBA students.

Professor Munson serves as a senior editor for Production and Operations Management, and he serves on the editorial review board of four other journals. He has published more than 25 articles in such journals as Production and Operations Management, IIE Transactions, Decision Sciences, Naval Research Logistics, European Journal of Operational Research, Journal of the Operational Research Society, and Annals of Operations Research. He is editor of the book The Supply Chain Management Casebook: Comprehensive Coverage and Best Practices in SCM, and he has co-authored the research monograph Quantity Discounts: An Overview and Practical Guide for Buyers and Sellers. He is also coauthor of Managerial Decision Modeling with Spreadsheets (fourth edition), published by Pearson Press.

Book Description Softcover. Condition: New. Brand new book. This is an international edition textbook with identical content as the US version and is usually paperback bound instead of hardcover. We ship all our orders from CA/IL, USA (depending on your address) and NOT from Asia! Buy with confidence from a 5-star US based seller. Choose expedited shipping for superfast delivery with tracking. Seller Inventory # 765|9780134130422

Book Description Softcover. Condition: New. ***International Edition***Soft cover/Paperback*** Textbook printed in English. ***Brand New***. Most international edition has different ISBN and Cover design. Some book may show sales disclaimer such as "Not for Sale or Restricted in US" on the cover page but it is absolutely legal to use. Please provides valid phone number with your order for easy delivery. Seller Inventory # 9780134130422