Items related to Marketing: An Introduction 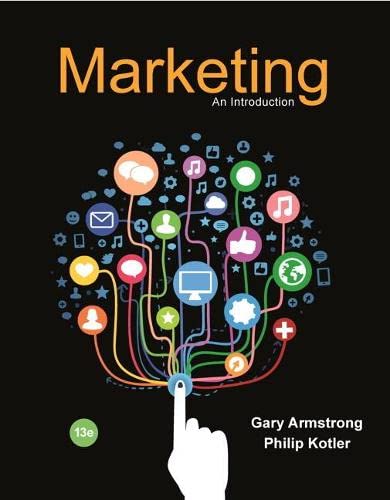 For undergraduate courses on the Principles of Marketing.

An introduction to the world of marketing using a proven, practical, and engaging approach

Marketing: An Introduction shows students how customer value—creating it and capturing it—drives every effective marketing strategy. Using an organization and learning design that includes real-world examples and information that help bring marketing to life, the text gives readers everything they need to know about marketing in an effective and engaging total learning package.

The Thirteenth Edition reflects the latest trends in marketing, including new coverage on online, social media, mobile, and other digital technologies, leaving students with a richer understanding of basic marketing concepts, strategies, and practices.

This title is also available with MyMarketingLab—an online homework, tutorial, and assessment program designed to work with this text to engage students and improve results. Within its structured environment, students practice what they learn, test their understanding, and pursue a personalized study plan that helps them better absorb course material and understand difficult concepts.

NOTE: You are purchasing a standalone product; MyMarketingLab does not come packaged with this content. If you would like to purchase both the physical text and MyMarketingLab search for:

As a team, Gary Armstrong and Philip Kotler provide a blend of skills uniquely suited to writing an introductory marketing text. Professor Armstrong is an award-winning teacher of undergraduate business students. Professor Kotler is one of the world’s leading authorities on marketing. Together they make the complex world of marketing practical, approachable, and enjoyable.

Gary Armstrong is Crist W. Blackwell Distinguished Professor Emeritus of Undergraduate Education in the Kenan-Flagler Business School at the University of North Carolina at Chapel Hill. He holds undergraduate and masters degrees in business from Wayne State University in Detroit, and he received his Ph.D. in marketing from Northwestern University. Dr.Armstrong has contributed numerous articles to leading business journals. As a consultant and researcher, he has worked with many companies on marketing research, sales management, and marketing strategy.

But Professor Armstrong’s first love has always been teaching. His long-held Blackwell Distinguished Professorship is the only permanent endowed professorship for distinguished undergraduate teaching at the University of North Carolina at Chapel Hill. He has been very active in the teaching and administration of Kenan-Flagler’s undergraduate program. His administrative posts have included Chair of Marketing, Associate Director of the Undergraduate Business Program, Director of the Business Honors Program, and many others. Through the years, he has worked closely with business student groups and has received several UNC campus wide and Business School teaching awards. He is the only repeat recipient of school’s highly regarded Award for Excellence in Undergraduate Teaching, which he received three times. Most recently, Professor Armstrong received the UNC Board of Governors Award for Excellence in Teaching, the highest teaching honor bestowed by the sixteen-campus University of North Carolina system.

Philip Kotler is S. C. Johnson & Son Distinguished Professor of International Marketing at the Kellogg School of Management, Northwestern University. He received his master’s degree at the University of Chicago and his Ph.D. at M.I.T., both in economics. Dr. Kotler is author of Marketing Management (Pearson), now in its fifteenth edition and the most widely used marketing textbook in graduate schools of business worldwide. He has authored dozens of other successful books and has written more than 50 books and 150 articles in leading journals. He is the only three-time winner of the coveted Alpha Kappa Psi award for the best annual article in the Journal of Marketing.

Professor Kotler was named the first recipient of four major awards: the Distinguished Marketing Educator of the Year Award and the William L. Wilkie “Marketing for a Better World” Award, both given by the American Marketing Association; the Philip Kotler Award for Excellence in Health Care Marketing presented by the Academy for Health Care Services Marketing; and the Sheth Foundation Medal for Exceptional Contribution to Marketing Scholarship and Practice. He is a charter member of the Marketing Hall of Fame, was voted the first Leader in Marketing Thought by the American Marketing Association, and was named The Founder of Modern Marketing Management in the Handbook of Management Thinking. His numerous other major honors include the Sales and Marketing Executives International Marketing Educator of the Year Award; The European Association of Marketing Consultants and Trainers Marketing Excellence Award; the Charles Coolidge Parlin Marketing Research Award; and the Paul D. Converse Award, given by the American Marketing Association to honor “outstanding contributions to science in marketing.” A recent Forbes survey ranks Professor Kotler in the top 10 of the world’s most influential business thinkers. And in a recent Financial Times poll of 1,000 senior executives across the world, Professor Kotler was ranked as the fourth “most influential business writer/guru” of the twenty-first century.

Dr. Kotler has served as chairman of the College on Marketing of the Institute of Management Sciences, a director of the American Marketing Association, and a trustee of the Marketing Science Institute. He has consulted with many major U.S. and international companies in the areas of marketing strategy and planning, marketing organization, and international marketing. He has traveled and lectured extensively throughout Europe, Asia, and South America, advising companies and governments about global marketing practices and opportunities.

Book Description Pearson, 2016. Condition: New. Brand new book. This is an international edition textbook with identical content as the US version and is usually paperback bound instead of hardcover. We ship all our orders from CA/IL, USA (depending on your address) and NOT from Asia! Buy with confidence from a 5-star US based seller. Choose expedited shipping for superfast delivery with tracking. Seller Inventory # 314|9780134149530

Book Description Pearson, 2016. Softcover. Condition: New. ***International Edition***Soft cover/Paperback*** Textbook printed in English. ***Brand New***. Most international edition has different ISBN and Cover design. Some book may show sales disclaimer such as "Not for Sale or Restricted in US" on the cover page but it is absolutely legal to use. All textbook arrives within 5-7business days. Please provides valid phone number with your order for easy delivery. Seller Inventory # 013414953X

Book Description Pearson, 2016. soft cover. Condition: New. International Edition. No supplemental materials. International Editions may have a different cover or ISBN but generally have the exact same content as the US edition, just at a more affordable price. In some cases, end of chapter questions may vary slightly from the US edition. International Editions are typically printed in grayscale, and likely will not have any color throughout the book. New. Books ship from multiple locations depending on availability. All orders are shipped with tracking information. We take pride in our customer service. Please contact us if you have any questions regarding this listing. Seller Inventory # 11402