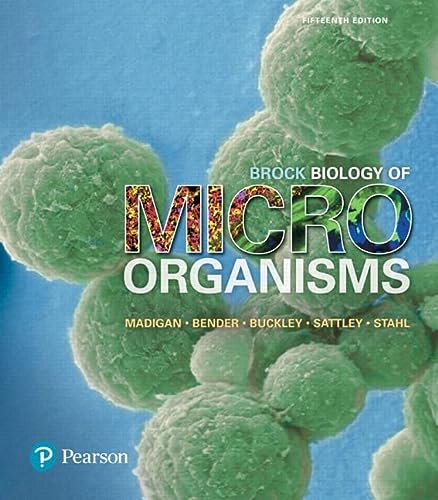 For courses in General Microbiology.

A streamlined approach to master microbiology

Brock Biology of Microorganisms  is the leading majors microbiology text on the market. It sets the standard for impeccable scholarship, accuracy, and strong coverage of ecology, evolution, and metabolism. The 15th edition seamlessly integrates the most current science, paying particular attention to molecular biology and the genomic revolution. It introduces a flexible, more streamlined organization with a consistent level of detail and comprehensive art program.  Brock Biology of Microorganisms  helps students quickly master concepts, both in and outside the classroom, through personalized learning, engaging activities to improve problem solving skills, and superior art and animations with Mastering™ Microbiology.

Students, if interested in purchasing this title with Mastering Microbiology, ask your instructor for the correct package ISBN and Course ID. Instructors, contact your Pearson representative for more information.

Note: You are purchasing a standalone product; Mastering™ Microbiology does not come packaged with this content. Students, if interested in purchasing this title with Mastering Microbiology, ask your instructor for the correct package ISBN and Course ID. Instructors, contact your Pearson representative for more information.

If you would like to purchase both the physical text and Mastering Microbiology, search for:

MasteringMicrobiology should only be purchased when required by an instructor.

Michael T. Madigan received his B.S. in Biology and Education from Wisconsin State University–Stevens Point (1971) and his M.S. (1974) and Ph.D. (1976) in Bacteriology from the University of Wisconsin–Madison in the laboratory of Thomas Brock. Following a postdoc at Indiana University with Howard Gest, Madigan moved to Southern Illinois University Carbondale, where he taught courses in introductory microbiology and bacterial diversity as a professor of microbiology for 33 years. In 1988 Madigan was selected as the Outstanding Teacher in the College of Science and in 1993, the Outstanding Researcher. In 2001 he received the SIUC Outstanding Scholar Award. In 2003 he received the Carski Award for Distinguished Undergraduate Teaching from the American Society for Microbiology, and he is an elected Fellow of the American Academy of Microbiology. Madigan’s research is focused on bacteria that inhabit extreme environments, and for the past 20 years his emphasis has been Antarctic microbiology. Madigan has co-edited a major treatise on phototrophic bacteria and served for 10 years as chief editor of the journal Archives of Microbiology. He currently serves on the editorial board of the journals Environmental Microbiology and Antonie van Leeuwenhoek. Madigan’s other interests include forestry, swimming, reading, and caring for his dogs and horses. He lives on a quiet lake with his wife, Nancy, three dogs (Kato, Nut, and Merry), and three horses (Eddie, Gwen, and Georgie).

Kelly S. Bender received her B.S. in Biology from Southeast Missouri State University (1999) and her Ph.D. (2003) in Molecular Biology, Microbiology, and Biochemistry from Southern Illinois University Carbondale. Her dissertation research focused on the genetics of perchlorate-reducing bacteria. During her postdoctoral fellowship, Bender worked on the genetic regulation of sulfate-reducing bacteria in the laboratory of Judy Wall at the University of Missouri–Columbia. She also completed a transatlantic biotechnology fellowship at Uppsala University in Sweden researching regulatory small RNAs in bacteria. In 2006, Bender returned to her alma mater, Southern Illinois University Carbondale, as an Assistant Professor in the Department of Microbiology and in 2012 was tenured and promoted to Associate Professor. Her lab studies a range of topics including regulation in sulfate-reducing bacteria and the microbial community dynamics of sites impacted by acid mine drainage. Bender teaches courses in introductory microbiology and microbial diversity, has served on numerous federal grant review panels, and is an active member of the American Society for Microbiology (ASM). Her other interests include spending time with her daughter, Violet, and husband, Dick.

Daniel H. Buckley is a Professor at Cornell University in the School of Integrative Plant Science. He earned his B.S. in Microbiology (1994) at the University of Rochester and his Ph.D. in Microbiology (2000) at Michigan State University. His graduate research focused on the ecology of soil microbial communities and was conducted in the laboratory of Thomas M. Schmidt in affiliation with the Center for Microbial Ecology. Buckley’s postdoctoral research examined linkages between microbial diversity and biogeochemistry in marine microbial mats and stromatolites and was conducted in the laboratory of Pieter T. Visscher at the University of Connecticut. Buckley joined the Cornell faculty in 2003. His research program investigates the ecology and evolution of microbial communities in soils with a focus on the causes and consequences of microbial diversity. He has taught both introductory and advanced courses in microbiology, microbial diversity, and microbial genomics. He received a National Science Foundation Faculty Early Career Development (CAREER) award in 2005 for excellence in integrating research and education. He has served as Director of the Graduate Field of Soil and Crop Sciences at Cornell and Co-Director of the Microbial Diversity summer course of the Marine Biological Laboratory in Woods Hole, Massachusetts. He currently serves on the editorial boards of Applied and Environmental Microbiology and Environmental Microbiology. Buckley lives in Ithaca, New York, with his wife, Merry, and sons, Finn and Colin.

W. Matthew Sattley received his B.A. in Biology in 1998 from Blackburn College (Illinois) and his Ph.D. (2006) in Molecular Biology, Microbiology, and Biochemistry from Southern Illinois University Carbondale. His graduate studies focused on the microbiology of sulfur cycling and other biogeochemical processes in permanently ice-covered lakes of Antarctica. In his postdoctoral research at Washington University in Saint Louis, he studied the physiology and genomics of anoxygenic phototrophic bacteria in Robert Blankenship’s laboratory. Sattley then accepted a faculty appointment to the Department of Biology at MidAmerica Nazarene University (Kansas), where he supervised undergraduate research and taught courses in microbiology, environmental science, and cell biology. In 2010, Sattley transitioned to the Division of Natural Sciences at Indiana Wesleyan University, where he is a Professor of Biology and Director of the Hodson Summer Research Institute, a faculty-led summer research program for undergraduate students in the Natural Sciences. His research group investigates the ecology, diversity, and genomics of bacteria that inhabit extreme environments. Sattley is a member of the American Society for Microbiology (including its Indiana Branch) and the Indiana Academy of Science, and he currently serves as an expert reviewer for the undergraduate microbiology research journal Fine Focus. Sattley lives in Marion, Indiana, with his wife, Ann, and sons, Josiah and Samuel. Outside of teaching and research, Sattley enjoys playing drums, reading, motorcycling, and talking baseball and cars with his boys.

David A. Stahl received his B.S. degree in Microbiology from the University of Washington, Seattle, and completed graduate studies in microbial phylogeny and evolution with Carl Woese in the Department of Microbiology at the University of Illinois at Urbana–Champaign. Subsequent work as a postdoctoral fellow with Norman Pace, then at the National Jewish Hospital in Colorado, involved early applications of 16S rRNA-based sequence analysis to the study of natural microbial communities. In 1984 Stahl joined the faculty at the University of Illinois with appointments in Veterinary Medicine, Microbiology, and Civil Engineering. In 1994 he moved to the Department of Civil Engineering at Northwestern University, and in 2000 returned to the University of Washington as professor in the Departments of Civil and Environmental Engineering and Microbiology. Stahl is known for his work in microbial evolution, ecology, and systematics, and received the 1999 Bergey Award and the 2006 ASM Procter & Gamble Award in Applied and Environmental Microbiology. Stahl is an elected fellow of the American Academy of Microbiology and a member of the National Academy of Engineering. His main research interests surround the biogeochemistry of nitrogen and sulfur and the microbial communities that sustain the associated nutrient cycles. His laboratory was first to culture ammonia-oxidizing Archaea, a group believed to be the key mediators of this process in the nitrogen cycle. Stahl has taught several courses in environmental microbiology, was one of the founding editors of the journal Environmental Microbiology, and has served on many advisory committees. Outside the lab, Stahl enjoys hiking, bicycling, spending time with family, reading a good science fiction book, and—with his wife, Lin—renovating an old farmhouse on Bainbridge Island.

Book Description Pearson, 2017. Soft cover. Condition: New. Brand New International Edition textbook. Some book may show sales disclaimer such as "Not for Sale or Restricted in US" on the cover page but it is absolutely legal to use in US or Canada. Ship from Multiple Locations, including Asia , Hong Kong ,Taiwan , US or Canada depend on stock location. Seller Inventory # 000668

Book Description Pearson, 2017. Softcover. Condition: New. ***International Edition***Soft cover/Paperback*** Textbook printed in English. ***Brand New***. Most international edition has different ISBN and Cover design. Some book may show sales disclaimer such as "Not for Sale or Restricted in US" on the cover page but it is absolutely legal to use. Please provides valid phone number with your order for easy delivery. Seller Inventory # C9780134261928

Book Description Pearson, 2017. soft cover. Condition: New. International Edition. No supplemental materials. International Editions may have a different cover or ISBN but generally have the exact same content as the US edition, just at a more affordable price. In some cases, end of chapter questions may vary slightly from the US edition. International Editions are typically printed in grayscale, and likely will not have any color throughout the book. New. Books ship from multiple locations depending on availability. All orders are shipped with tracking information. We take pride in our customer service. Please contact us if you have any questions regarding this listing. Seller Inventory # 11438