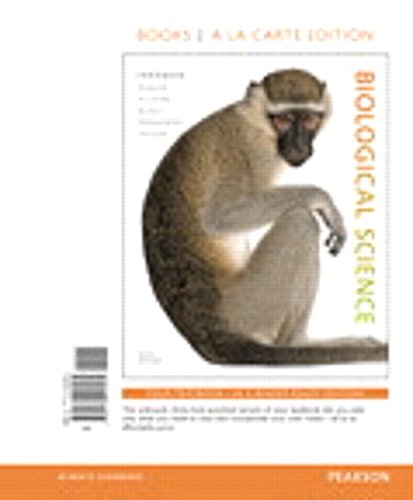 NOTE: This edition features the same content as the traditional text in a convenient, three-hole-punched, loose-leaf version. Books a la Carte also offer a great value–this format costs significantly less than a new textbook. Before purchasing, check with your instructor or review your course syllabus to ensure that you select the correct ISBN. Several versions of Pearson's MyLab & Mastering products exist for each title, including customized versions for individual schools, and registrations are not transferable. In addition, you may need a CourseID, provided by your instructor, to register for and use Pearson's MyLab & Mastering products.

For introductory courses for biology majors.

Scott Freeman’s Biological Science is beloved for its Socratic narrative style, its emphasis on experimental evidence, and its dedication to active learning. Science education research indicates that true mastery of content requires a move away from memorization towards active engagement with the material in a focused, personal way. Biological Science is designed to equip students with strategies to assess their level of understanding and identify the types of cognitive skills that need improvement.

With the Sixth Edition, content has been streamlined with an emphasis on core concepts and core competencies from the Vision and Change in Undergraduate Biology Education report. The text’s unique BioSkills section is now placed after Chapter 1 to help students develop key skills needed to become a scientist, new “Making Models” boxes guide learners in interpreting and creating models, and new “Put It all Together” case studies conclude each chapter and help students see connections between chapter content and current, real-world research questions. New, engaging content includes updated coverage of global climate change, advances in genomic editing, and recent insights into the evolution of land plants. The features in the text are supported and integrated with MasteringBiology activities, Learning Catalytics™, and new whiteboard videos that guide students in completing the “Making Models” assignments.

MasteringBiology from Pearson is the leading online homework, tutorial, and assessment system, designed to improve results by engaging students before, during, and after class with powerful content and activities. Instructors ensure students arrive ready to learn by assigning educationally effective content before class and encourage critical thinking and retention with in-class resources such as Learning Catalytics™. Students can further master concepts after class through traditional and adaptive homework assignments that provide hints and answer-specific feedback. The Mastering gradebook records scores for all automatically graded assignments in one place, while diagnostic tools give instructors access to rich data to assess student understanding and misconceptions.

Lizabeth A. Allison is Chancellor Professor of Biology at the College of William & Mary. She received her Ph.D. in Zoology from the University of Washington, specializing in molecular and cellular biology. Before coming to William & Mary, she spent eight years as a faculty member at the University of Canterbury in New Zealand. Liz teaches introductory biology for majors and upper-division molecular biology courses. She has mentored graduate students and more than 100 undergraduate research students, many of them coauthoring papers with her on intracellular trafficking of the thyroid hormone receptor in normal and cancer cells. The recipient of numerous awards, including a State Council for Higher Education in Virginia (SCHEV) Outstanding Faculty Award in 2009, Liz received one of the three inaugural Arts & Sciences Faculty Awards for Teaching Excellence in 2011, and a Plumeri Award for Faculty Excellence in 2012. In addition to her work on this text, she is author of Fundamental Molecular Biology, now in its second edition, with a third edition underway.

Michael Black received his Ph.D. in Microbiology & Immunology from Stanford University School of Medicine as a Howard Hughes Predoctoral Fellow. After graduation, he studied cell biology as a Burroughs Wellcome Postdoctoral Fellow at the MRC Laboratory of Molecular Biology in Cambridge, England. His current research focuses on the use of molecules to identify and track the transmission of microbes in the environment. Michael is a professor of Cell & Molecular Biology at California Polytechnic State University in San Luis Obispo, where he teaches introductory and advanced classes for majors in cell biology and microbiology. In addition to his teaching and research activities, Michael serves as the director of the Undergraduate Biotechnology Lab, where he works alongside undergraduate technicians to integrate research projects and inquiry-based activities into undergraduate classes.

Jeff Carmichael received his B.S. in Biology from Slippery Rock University in Pennsylvania and his Ph.D. in Plant Biology from the University of Georgia. As an undergraduate student, he spent some time studying enzyme kinetics through a fellowship at Oak Ridge National Laboratory in Tennessee. His graduate work focused on sexual reproduction in an intriguing group of seed plants. He has been teaching and coordinating Introductory Biology at the University of North Dakota for more than 20 years. He also serves in the Office of Instructional Development where he helps other faculty members incorporate evidence-based best teaching practices in their courses. He has received excellence in teaching awards at UND and as a graduate student in Georgia. His revision of Unit 6 and part of Unit 5 of the Sixth Edition is his first foray into textbook writing.

Scott Freeman received a Ph.D. in Zoology from the University of Washington and was subsequently awarded an Alfred P. Sloan Postdoctoral Fellowship in Molecular Evolution at Princeton University. He has done research in evolutionary biology on topics ranging from nest parasitism to the molecular systematics of the blackbird family and is coauthor, with Jon Herron, of the standard-setting undergraduate text Evolutionary Analysis. Scott is the recipient of a Distinguished Teaching Award from the University of Washington and is currently a Senior Lecturer in the UW Department of Biology, where he teaches introductory biology for majors, a writing-intensive course for majors called The Tree of Life, and a graduate seminar in college science teaching. Scott’s current research focuses on how active learning affects student learning and academic performance.

Greg Podgorski received his Ph.D. in Molecular and Cellular Biology from Penn State University and has been a postdoctoral fellow at the Max Plank Institute for Biochemistry and Columbia University. His research interests are in biology education, developmental genetics, and computational biology. Greg’s most recent work has been in mathematical modeling of how patterns of different cell types emerge during development and how tumors recruit new blood vessels in cancer. Greg has been teaching at Utah State University for more than 20 years in courses that include introductory biology for majors and for nonmajors, genetics, cell biology, developmental biology, and microbiology, and he has offered courses in nonmajors biology in Beijing and Hong Kong. He’s won teaching awards at Utah State University and has been recognized by the National Academies as a Teaching Fellow and a Teaching Mentor.

Kim Quillin received her B.A. in Biology at Oberlin College summa cum laude and her Ph.D. in Integrative Biology from the University of California, Berkeley as a National Science Foundation Graduate Fellow. Kim has worked in the trenches with Scott Freeman on every edition of Biological Science, starting with the ground-up development of the illustrations in the first edition in 1999 and expanding her role in each edition, always with the focus of helping students to think like biologists. Kim currently teaches introductory biology at Salisbury University, a member of the University System of Maryland, where she is actively involved in the ongoing student- centered reform of the concepts-and-methods course for biology majors. Her current research focuses on the scholarship of teaching and learning with an emphasis on visual model-based reasoning as a science process skill.

Emily Taylor earned a B.A. in English at the University of California, Berkeley followed by a Ph.D. in Biological Sciences from Arizona State University, where she conducted research in the field of environmental physiology as a National Science Foundation Graduate Research Fellow. She is currently an associate professor of Biological Sciences at the California Polytechnic State University in San Luis Obispo, California. Her student-centered research program focuses on the endocrine and reproductive physiology of freeranging reptiles, especially rattlesnakes. She teaches numerous undergraduate and graduate courses, including introductory biology, anatomy and physiology, endocrinology, and herpetology, and received the California Faculty Association’s Distinguished Educator Award in 2010 and Cal Poly’s Distinguished Teaching Award in 2012.