Items related to Microbiology with Diseases by Body System, Books a... 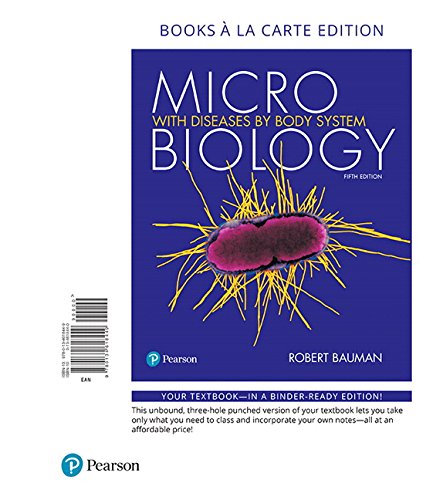 NOTE: This edition features the same content as the traditional text in a convenient, three-hole-punched, loose-leaf version. Books a la Carte also offer a great value; this format costs significantly less than a new textbook. Before purchasing, check with your instructor or review your course syllabus to ensure that you select the correct ISBN. Several versions of MyLab™ and Mastering™ platforms exist for each title, including customized versions for individual schools, and registrations are not transferable. In addition, you may need a Course ID, provided by your instructor, to register for and use MyLab and Mastering products.

For pre-nursing and allied health students (including mixed-majors courses).

Invest in your future: microbiology matters

Dr. Robert Bauman’s Microbiology with Diseases by Body System, 5th Edition helps students visualize the invisible and practice critical thinking with real-world problems and clinical applications. The textbook includes QR codes for Dr. Bauman Video Tutors and Disease in Depth features that foster understanding and encourage students to explore microbiology. The continued focus on clinical situations prepares students for future opportunities in applied practice and healthcare careers. With the 5th Edition, new Solve the Problem features ask students to work through real-world microbiology problems and offer instructors active-learning worksheets for their course. This edition results from a collaborative effort of educators, students, editors, and top scientific illustrators to deliver a textbook that presents the latest scientific and educational research and data in microbiology.

Mastering™ Microbiology is an online homework, tutorial, and assessment product designed to improve results by helping students quickly master concepts. Students benefit from self-paced tutorials that feature immediate wrong answer feedback and hints that emulate the office-hour experience to help keep students on track. With a wide range of interactive, engaging, and assignable activities, students are encouraged to actively learn and retain tough course concepts. An expanded, robust Mastering Microbiology program works with the text to provide an interactive and personalized learning experience that ensures students learn microbiology both in and out of the classroom.

If you would like to purchase both the loose-leaf version of the text and MyLab and Mastering, search for:

ROBERT W. BAUMAN is a professor of biology and past chairman of the Department of Biological Sciences at Amarillo College in Amarillo, Texas. He has taught microbiology, human anatomy and physiology, and botany for over thirty years. In 2004, the students of Amarillo College selected Dr. Bauman as the recipient of the John F. Mead Faculty Excellence Award and he has been nominated for the one-time award every year since. He received an M.A. degree in botany from the University of Texas at Austin and a Ph.D. in biology from Stanford University. His research interests have included the morphology and ecology of freshwater algae, the cell biology of marine algae (particularly the deposition of cell walls and intercellular communication), environmentally triggered chromogenesis in butterflies, and terrestrial oil pollution remediation by naturally occurring bacteria. He is a member of the American Society of Microbiology (ASM) where he has held national offices, Texas Community College  Teachers Association (TCCTA) where he serves in a statewide position of leadership, American Association for the Advancement of Science (AAAS), Human Anatomy and Physiology Society (HAPS), and The Lepidopterists’ Society. When he is not writing books, he enjoys spending time with his family: gardening, hiking, camping, rock climbing, backpacking, cycling, skiing, and reading by a crackling fire in the winter and in a gently swaying hammock in the summer.

TODD P. PRIMM (contributor) is a Professor at Sam Houston State University, where he teaches pre-nursing and general microbiology. He also serves as Director of the Professional and Academic Center for Excellence, which focuses on improving teaching and learning on campus. In 2010, he was Distinguished Alumnus of the Graduate School of Biomedical Sciences of Baylor College of Medicine, where he earned a Ph.D. in Biochemistry. He received a B.S. from Texas A&M University. He is very active in the American Society for Microbiology and received the Texas Branch 2015 Faculty Teaching Award. He was chair of the organizing committee for the 2013 ASM Conference for Undergraduate Educators, participated in the 2012 Research Residency of the ASM/NSF Biology Scholars Program, and currently serves on the editorial board for the Journal of Microbiology and Biology Education. He is also an affiliate staff member with the international organization Cru. He loves teaching and mentoring students and spending time with his wonderful wife of 25 years and their five children.

About the Clinical Consultants

CECILY D. COSBY is nationally certified as both a family nurse practitioner and physician assistant. She is a professor of nursing, currently teaching at Samuel Merritt University in Oakland, California, and has been in clinical practice since 1980. She received her Ph.D. and M.S. from the University of California, San Francisco; her BSN from California State University, Long Beach; and her P.A. certificate from the Stanford Primary Care program. She is the Director of Samuel Merritt University’s Doctor of Nursing Practice Program.

JEAN E. MONTGOMERY is a registered nurse formerly teaching in the associate degree nursing program at Austin Community College in Texas. She received her MSN from the University of Texas Health Science Center at San Antonio, Texas.