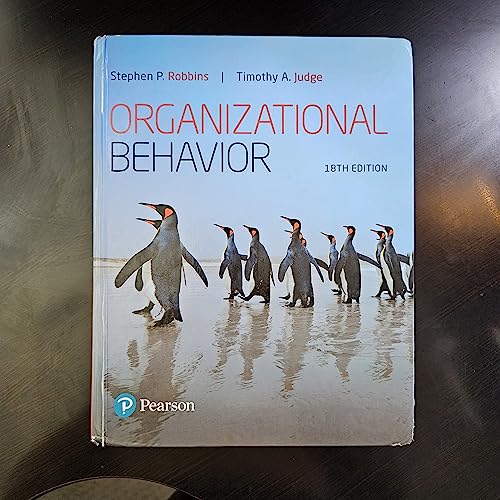 For undergraduate and graduate courses in organizational behavior.

The world’s most successful Organizational Behavior textbook provides the research you want, in the language your students understand. This text makes current, relevant research come alive for readers. The 18th Edition reflects the most recent research and business events within the field of organizational behavior, while maintaining its hallmark features -- a clear writing style, cutting-edge content, and intuitive pedagogy. There’s a reason why Robbins’s textbooks have educated millions of students and have been translated into 20 languages -- and it’s because of a commitment to provide engaging, cutting-edge material that helps students understand and connect with organizational behavior.

By combining trusted authors’ content with digital tools and a flexible platform, MyLab personalizes the learning experience and improves results for each student.

Note: You are purchasing a standalone product; MyLab Management does not come packaged with this content. Students, if interested in purchasing this title with MyLab Management, ask your instructor for the correct package ISBN and Course ID. Instructors, contact your Pearson representative for more information.

If you would like to purchase both the physical text and MyLab Management, search for:

Stephen P. Robbins is Professor Emeritus of Management at San Diego State University and the world’s best-selling textbook author in the areas of both management and organizational behavior. His books are used at more than a thousand US colleges and universities, have been translated into 19 languages, and have adapted editions for Canada, Australia, South Africa, and India. Dr. Robbins is also the author of the best-selling books The Truth About Managing People, 2nd ed. (Financial Times/Prentice Hall, 2008) and Decide & Conquer (Financial Times/Prentice Hall, 2004).

Book Description Softcover. Condition: New. Brand new book. This is an international edition textbook with identical content as the US version and is usually paperback bound instead of hardcover. We ship all our orders from CA/IL, USA (depending on your address) and NOT from Asia! Buy with confidence from a 5-star US based seller. Choose expedited shipping for superfast delivery with tracking. Seller Inventory # 27|9780134729329

Book Description Condition: New. Brand New Paperback International Edition.We Ship to PO BOX Address also. EXPEDITED shipping option also available for faster delivery.This item may ship from the US or other locations in India depending on your location and availability. Seller Inventory # ANNNUS-7942

Book Description Soft cover. Condition: New. Brand New International Edition textbook. Some book may show sales disclaimer such as "Not for Sale or Restricted in US" on the cover page but it is absolutely legal to use in US or Canada. Ship from Multiple Locations, including Asia , Hong Kong ,Taiwan , US or Canada depend on stock location. Seller Inventory # 001064

Book Description Condition: New. Brand New Paperback International Edition.We Ship to PO BOX Address also. EXPEDITED shipping option also available for faster delivery.This item may ship from the US or other locations in India depending on your location and availability. Seller Inventory # ANNNUS-186250