Items related to Global Problems and the Culture of Capitalism, Books... 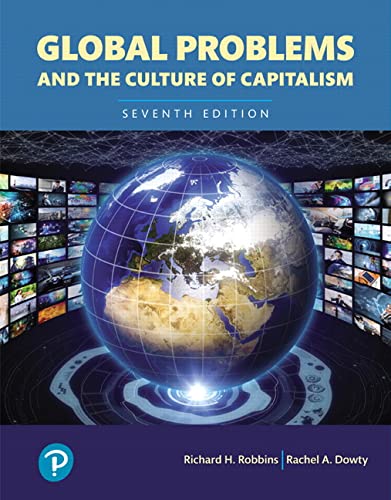 NOTE: This edition features the same content as the traditional text in a convenient, three-hole-punched, loose-leaf version. Books a la Carte also offer a great value; this format costs significantly less than a new textbook. Before purchasing, check with your instructor or review your course syllabus to ensure that you select the correct ISBN.

For courses in global issues and cultural anthropology.

Examine the development and impact of capitalism on global systems

The 7th Edition of Global Problems and the Culture of Capitalism follows the path of capitalism from its roots over 500 years ago to its current status in the world. Emerging from Western Europe and expanding to the United States and the rest of the world, capitalism and the systems that have contested it have impacted the economic, political, and social forces that dominate readers’ lives. The authors draw on a variety of disciplines, including anthropology, history, economics, sociology, and more, to provide readers with a comprehensive understanding of the problems with capitalism and actionable ways to solve them. The 7th Edition provides updated content that reflects the changes in the world since the last edition and introduces the content in a reader-friendly and engaging way.

Richard H. Robbins received his PhD in anthropology from University of North Carolina at Chapel Hill and has spent his entire teaching career at the State University of New York at Plattsburgh. Some of his most formative academic experiences include field research among Cree, Inuit, and Naskapi First Nations peoples of Canada; Acadian farmers and fisherfolk in New Brunswick, Canada; and religious communal societies in the United States. A research semester at the Science Studies Unit at the University of Edinburgh would count as one of his most stimulating intellectual experiences. His most recent books include Debt as Power (Manchester University Press, 2016) and Anthropology of Money (Routledge, 2017), both co-authored by Tom DiMuzio.

He has received the State University of New York’s Chancellor’s Award for Excellence in Teaching and the American Anthropological Association/McGraw-Hill Teacher of the Year Award. He also appeared in the hit anti-globalization documentary, The Yes Men. He is currently SUNY Distinguished Teaching Professor at Plattsburgh.


Rachel Dowty Beech is a visiting assistant professor in the Department of Fire Science, and Coordinator of the online Emergency Management Master’s Degree Program at University of New Haven. She published works in the fields of Science and Technology Studies (STS), disaster anthropology, environment and ecology, learning, and organizational culture. Her edited volume Dynamics of Disaster: Lessons on Risk, Response, and Recovery with Barbara L. Allen (Earthscan 2011) addresses some of the sociocultural problems arising from the nexus of disasters and the culture of capitalism.

1. Global Problems And The Culture Of Capitalism 7 ed

2. Global Problems And The Culture Of Capitalism 7 ed