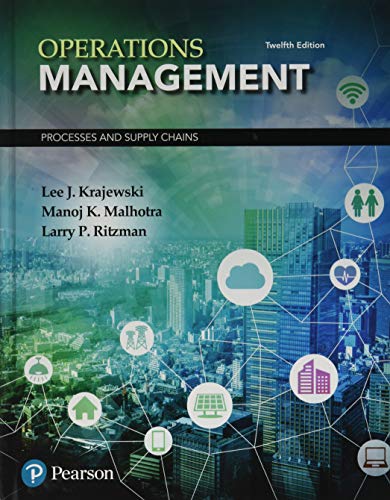 Practical, easy to read text with a managerial approach to operations management

Operations Management: Processes and Supply Chains provides students with a comprehensive framework for addressing operational process and supply chain issues and uses a systemized approach while focusing on issues of current interest. The 12th Edition provides ample opportunities for students to experience the role of a manager with challenging problems, cases, a library of videos customized to the individual chapters, simulations, experiential exercises, and tightly integrated online resources.

By combining trusted authors’ content with digital tools and a flexible platform, MyLab personalizes the learning experience and improves results for each student.

Note: You are purchasing a standalone product; MyLab Operations Management does not come packaged with this content. Students, if interested in purchasing this title with MyLab, ask your instructor to confirm the correct package ISBN and Course ID. Instructors, contact your Pearson representative for more information.

If you would like to purchase both the physical text and MyLab Operations Management search for:

Lee J. Krajewski is Professor Emeritus at The Ohio State University and Professor Emeritus at the University of Notre Dame. While at The Ohio State University, he received the University Alumni Distinguished Teaching Award and the College of Business Outstanding Faculty Research Award. He initiated the Center for Excellence in Manufacturing Management and served as its director for four years. At the University of Notre Dame, he held the William and Cassie Daley Chair in Management. In addition, he received the National President’s Award and the National Award of Merit of the American Production and Inventory Control Society. He served as president of the Decision Sciences Institute and was elected a Fellow of the Decision Sciences Institute in 1988. He received the Distinguished Service Award in 2003.

Krajewski received his PhD from the University of Wisconsin. Over the years, he has designed and taught courses at both graduate and undergraduate levels on topics such as operations strategy, introduction to operations management, operations design, project management, and manufacturing planning and control systems.

Manoj K. Malhotra is the Dean and Albert J. Weatherhead III Professor of Management at the Weatherhead School of Management, Case Western Reserve University. Previously, he was the Senior Associate Dean of Graduate Programs, Jeff B. Bates Professor, and Chairman of the Management Science Department at the Darla Moore School of Business, University of South Carolina (USC), Columbia. He also served from 2005 to 2017 as the founding director of the Center for Global Supply Chain and Process Management (GSCPM) at the Moore School. He earned an engineering undergraduate degree from the Indian Institute of Technology (IIT), Kanpur, India, in 1983, and a PhD in operations management from The Ohio State University in 1990. He is a Fellow of the Decision Sciences Institute (DSI) and the American Production and Inventory Management Society (APICS). Malhotra has conducted seminars and consulted with firms such as Avaya, BMW, Continental, Cummins Turbo Technologies, Delta Air Lines, John Deere, Metso Paper, Palmetto Health, Sonoco, Verizon, Walmart, and Westinghouse-Toshiba among others.

Apart from teaching operations management, supply chain management, and global business issues at USC, Malhotra has also taught at the Terry School of Business, University of Georgia; Wirtschaftsuniversität Wien in Austria; and the Graduate School of Management at Macquarie University, Australia. His research has thematically focused on the deployment of flexible resources in manufacturing and service firms, operations and supply chain strategy, and on the interface between operations management and other functional areas of business. His work on these and related issues has been published in the leading refereed journals of the field such as Decision Sciences, European Journal of Operational Research, Interfaces, Journal of Operations Management, and Production and Operations Management. Malhotra has been recognized for his pedagogical and scholarly contributions through several teaching and discipline-wide research awards. He is the recipient of the Michael J. Mungo Outstanding Graduate Teaching Award in 2006, the Carolina Trustee Professor Award in 2014, and the Breakthrough Leadership in Research Award in 2014 from the University of South Carolina. He has been the program chair for international conferences at both the Decision Sciences Institute (DSI) and Production and Operations Management Society (POMS). He also served as the President of POMS in 2017 and continues to serve on the editorial boards of top-tier journals in the field.

Larry P. Ritzman is Professor Emeritus at The Ohio State University and Professor Emeritus at Boston College. While at The Ohio State University, he served as department chairman and received several awards for both teaching and research, including the Pace Setters’ Club Award for Outstanding Research. While at Boston College, he held the Thomas J. Galligan, Jr. chair and received the Distinguished Service Award from the School of Management. He received his doctorate at Michigan State University, having had prior industrial experience at the Babcock and Wilcox Company. Over the years, he has been privileged to teach and learn more about operations management with numerous students at all levels–undergraduate, MBA, executive MBA, and doctorate.

Particularly active in the Decision Sciences Institute, Ritzman has served as council coordinator, publications committee chair, track chair, vice president, board member, executive committee member, doctoral consortium coordinator, and president. He was elected a Fellow of the Decision Sciences Institute in 1987 and earned the Distinguished Service Award in 1996. He has received three best-paper awards. He has been a frequent reviewer, discussant, and session

chair for several other professional organizations.

Book Description Pearson, 2018. Condition: New. Brand new book. This is an international edition textbook with identical content as the US version and is usually paperback bound instead of hardcover. We ship all our orders from CA/IL, USA (depending on your address) and NOT from Asia! Buy with confidence from a 5-star US based seller. Choose expedited shipping for superfast delivery with tracking. Seller Inventory # 49|9780134741062

Shipping: US$ 4.23
From United Kingdom to U.S.A.
Destination, rates & speeds