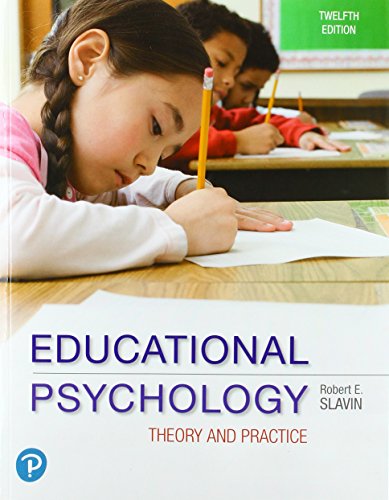 The intellectual grounding and practical strategies tomorrow’s teachers need to be effective instructors.

Educational Psychology: Theory and Practice  offers complete, up-to-date information that is presented in readable, practical ways and illustrated with engaging examples and case studies. Embedded videos and interactive activities in the Enhanced Pearson eText in MyLab Education further illustrate key concepts and facilitate application. The text makes the connection between theory and practice explicit, helping students transfer what they learn to their own teaching. The Twelfth Edition reflects ongoing changes in our learning sciences that continue to transform educational psychology and teaching, incorporating new research and practical applications of many contemporary topics.

Also available with MyLab Education MyLab Education is an online homework, tutorial, and assessment program designed to work with the text to engage students and improve results. Within its structured environment, students see key concepts demonstrated through real classroom video footage, practice what they learn, test their understanding, and receive feedback to guide their learning and ensure they master key learning outcomes.

Note: You are purchasing a standalone product; MyLab Education does not come packaged with this content. Students, if interested in purchasing this title with MyLab Education, ask your instructor to confirm the correct package ISBN and Course ID. Instructors, contact your Pearson representative for more information.

If you would like to purchase both the physical text and MyLab Education, search for:

Robert Slavin is currently Director of the Center for Research and Reform in Education at Johns Hopkins University and Chairman of the Success for All Foundation. He received his B.A. in Psychology from Reed College in 1972, and his Ph.D. in Social Relations in 1975 from Johns Hopkins University. Dr. Slavin has authored or co-authored more than 300 articles and book chapters on such topics as cooperative learning, comprehensive school reform, ability grouping, school and classroom organization, desegregation, mainstreaming, research review, and evidence-based reform. Dr. Slavin is the author or co-author of 24 books, including Educational Psychology: Theory into Practice  (Allyn & Bacon, 1986, 1988, 1991, 1994, 1997, 2000, 2003, 2006, 2009, 2012, 2015), Cooperative Learning: Theory, Research, and Practice  (Allyn & Bacon, 1990, 1995), Show Me the Evidence: Proven and Promising Programs for America’s Schools  (Corwin, 1998), Effective Programs for Latino Students (Erlbaum, 2000), Educational Research in the Age of Accountability  (Allyn & Bacon, 2007), and Two Million Children: Success for All (Corwin, 2009). He received the American Educational Research Association’s Raymond B. Cattell Early Career Award for Programmatic Research in 1986, the Palmer O. Johnson award for the best article in an AERA journal in 1988, the Charles A. Dana award in 1994, the James Bryant Conant Award from the Education Commission of the States in 1998, the Outstanding Leadership in Education Award from the Horace Mann League in 1999, the Distinguished Services Award from the Council of Chief State School Officers in 2000, the AERA Review of Research Award in 2009, the Palmer O. Johnson Award for the best article in an AERA journal in 2008, and was appointed as a Member of the National Academy of Education in 2009 and an AERA Fellow in 2010.

Book Description Softcover. Condition: New. Brand new book. This is an international edition textbook with identical content as the US version and is usually paperback bound instead of hardcover. We ship all our orders from CA/IL, USA (depending on your address) and NOT from Asia! Buy with confidence from a 5-star US based seller. Choose expedited shipping for superfast delivery with tracking. Seller Inventory # 851|9780134895109

Book Description Condition: New. Brand New Paperback International Edition.We Ship to PO BOX Address also. EXPEDITED shipping option also available for faster delivery.This item may ship from the US or other locations in India depending on your location and availability. Seller Inventory # ANNNUS-8652