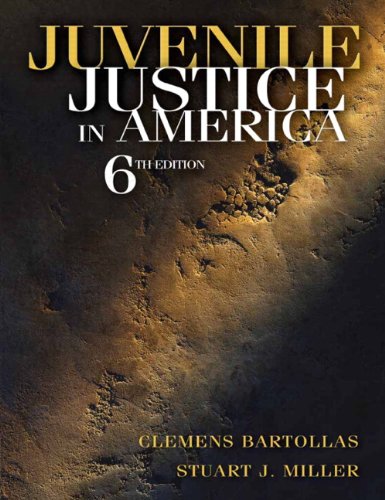 Unique in approach, JUVENILE JUSTICE IN AMERICA, 6/e gives students an intimate look at the fascinating and sometimes tragic world of the juvenile offender and the juvenile justice system. Its comprehensive approach progresses from the history of juvenile justice to the types of delinquency, to the causes of offending, to juvenile courts, corrections, probation and community-based programming. Fully revised, this edition includes a new chapter on juvenile aftercare and sections on youth development and treatment. Voices in the system are heard via a unique collection of first-person accounts that capture the personal, psychological and thinking processes that characterize juvenile misbehavior.

Juvenile justice is part of a broader human rights movement that is concerned with far more than society's response to juvenile lawbreaking. Indeed, as globalization, urbanization, industrialization, and worldwide communications increase, the world's attention increasingly is directed to the plight of all children regardless of circumstances. This concern is extremely late in coming. Approximately one-half of the world's population today is age 15 or younger, and the magnitude of the problems these youths face is staggering. Poverty, racism, sexism, ethnocentrism, and religious differences all influence how children are treated. The reality is that in many societies, children are considered to be economic hindrances and expendable. Local, municipal, state, provincial, territorial, and national governments often lump together the needy, the dependent and neglected, the status offender, the mentally ill, the violent, and the victim of abuse. These children are discriminated against, victimized, persecuted, and sometimes executed by citizens, police, and paramilitary forces. The problems youths face go to the core of cultural thinking, far beyond the needs of societies simply to fine tune agencies and rules for the handling of youths in need.

English-speaking countries such as the United States provide many of the ideals that are behind current world efforts to reform the world's approach to juvenile justice. Unfortunately, even world leaders often fall far short of their own ideals. In this regard, the United States is an excellent case study of what is and what could be in juvenile justice in the world today.

We judge that the history and philosophy of juvenile justice, the processing of youths, the detention of juveniles, and the diversion of youths from the juvenile justice system should all be included in discussing juvenile justice. We are committed, moreover, to depicting the fascinating and sometimes tragic world of the juvenile offender, to describing the jobs and problems of practitioners in the justice system who work with youths, and to addressing important issues inherent in juvenile justice. Other important features of this text include a description of drug-trafficking street gangs of the late 1980s and 1990s and information on hate crimes and skinheads; an analysis of the widespread use of narcotics and alcohol by American adolescents; an investigation of the rise and decline of juvenile homicides and the increased popularity of guns among adolescents; a portrayal of the emerging trends in juvenile justice; and an examination of such risk control and crime reduction measures in probation and aftercare as intensive supervision, boot camps, house arrests, and electronic monitoring devices.

These features reflect some of what has happened in juvenile justice over the past 40 years. The 1960s saw the introduction of court reforms that changed the face of juvenile justice, perhaps forever. The 1970s witnessed the decline of the rehabilitative ideal and the growth of a get tough attitude toward the more serious delinquent. The 1980s produced definitive efforts to curb the actions of violent and repetitive juvenile offenders. The death penalty, transfer to the adult court, determinate and mandatory sentences, preventive detention, and intensive supervision in probation and aftercare either were new means of social control or increased in use in the 1980s. As a new wave of reform was occurring in a few jurisdictions across the United States during the 1990s, vigorous debate was taking place in increasing numbers of other states concerning whether this nation should continue with its 100-year history of a separate court for juveniles.

The book begins with an overview of the juvenile justice system, with a special emphasis on the challenges facing juvenile justice in the twenty-first century. Chapter 2 presents an empirical profile on youth crime, derived from the main official and unofficial measurements of crime. Chapter 3 discusses the role of the police in preventing and controlling youth crime. Chapters 4 and 5 are concerned with the background, legal norms, stages of decision making, trial process, and personnel of the juvenile court. Chapter 6 shifts to the types of experiences that await the juvenile who is transferred to the adult court. Chapters 7, 8, and 9 focus on community-based corrections, including probation and aftercare services and residential programs. Chapter 10 presents the structures and programming of long-term confinement of juveniles. Chapter 11 examines theory and research in juvenile justice; Chapter 12 explores the major social correlates influencing youth crime; and Chapter 13 contains a classification scheme for juvenile offenders. Chapter 14 discusses treatment technologies. In Chapter 15, we introduce the topic of international juvenile justice to this text. The Beijing Rules, the model juvenile justice code for the world, provide a basis for the chapter. We discuss how juveniles are handled in three English-speaking countries, Canada, England, and Australia, as well as juvenile justice in four countries with distinctive problems from other areas of the world. Chapter 16 summarizes the text and projects what juvenile justice will look like in the early twenty-first century.

Although no one is totally value free, every attempt has been made to be fair and to provide a balanced presentation of the juvenile justice system. Before juvenile justice can move toward more just systems and a more humane future, its characteristics, policies, and problems must be carefully examined. This is the task of this text. ACKNOWLEDGMENTS

Many individuals have contributed to the writing of this book. The authors are profoundly grateful to our wives. Linda Dippold Bartollas edited and conceptualized materials throughout the manuscript and conducted interviews with juvenile offenders in three states. JoAnn Miller was a constant source of support and encouragement throughout the many phases involved in the publication of this third edition.

The authors are grateful to those members of the juvenile justice system who were willing to be interviewed, who contributed materials for this edition, or who assisted the authors in replicating "scenes from the halls of justice for photographs for this volume. Special thanks are due to North Franklin, Pennsylvania, Police Chief Roger Cuccaro, Lieutenant Kirk Hessler, and Sergeant Richard Horner; Claysville, Pennsylvania, Police Chief David Danley and Patrolman Donald Cooper; Pennsylvania Magistrate Jay Dutton; Probation Officer Steven Tkatch; Washington County Correctional Facility Treatment Supervisor Dave Talpus; Mall Manager David Graham; Mall Security Officer Rich Keys; and Mel Blount Youth Home Directors Mel Blount and Carol Lockett. Special thanks also are due to David Kraeuter, reference librarian at Washington and Jefferson College, as well as those students who were willing to be models for various photographs throughout this book: Mary Murphy, Jeffrey Pollack, Azzorrahhnove Livingstone, Andrea Miller, Robin Cook, Nelson Downey, and Richard Kelley; Katie Miller and Heather Dengle provided some new photographs for this edition.

We thank Betty Heine for all the tasks that she and her staff performed to keep the manuscript moving without interruption. Debbie Trent, Margie Mahramus, and Sunny SeFzik provided invaluable assistance in preparation of the text, instructor's manual and index, as did Katie Miller, Andrea Miller, and Laura Miller. Willie T. Barney, Robert Quirk, Hanna Bengston, Jamie Miller, and Matthew Beals also played key roles in the development of the manuscript. Finally, we are grateful to Neil Marquardt, our former editor at Prentice Hall, and Kim Davies, our present editor, and her associate, Marion Gottlieb, and especially, Linda Pawelchak for her outstanding project management skills.