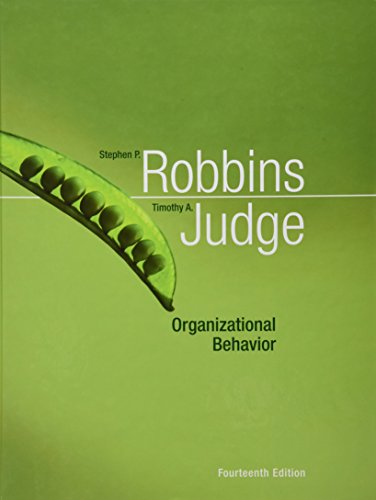 Robbins/Judge provides the research you want, in the language you can understand. The fourteenth edition continues its tradition of making current, relevant research come alive for readers.

Stephen P. Robbins (Ph.D., University of Arizona) is professor emeritus of management at San Diego State University and the world's best-selling textbook author in the areas of management and organizational behavior. His books have sold more than five million copies, have been translated into 19 languages, and have adapted editions for Canada, Europe, Australia, South Africa, the Arab world, and India. Dr. Robbins is also the author of the best-selling The Truth About Managing People, 2nd ed. (Financial Times Press) and Decide and Conquer (Financial Times Press). Dr. Robbins' research interests have focused on conflict, power, and politics in organizations; behavioral decision making; and the development of interpersonal skills. In his "other life," Dr. Robbins actively participates in masters' track competition. Since turning 50 in 1993, he's won 21 national championships, 12 world titles, and set numerous U.S. and world age-group records at 60, 100, 200, and 400 meters. He was inducted into the U.S. Masters' Track and Field Hall of Fame in 2005.

Dr. Timothy Judge  received his doctorate from the University of Illinois at Urbana-Champaign. He also holds a master's degree from Illinois and an undergraduate degree from the University of Iowa. Previously, Dr. Judge was associate professor in the School of Industrial and Labor Relations, Cornell University, and the Stanley M. Howe Professor in Leadership in the College of Business Administration, University of Iowa. Dr. Judge's research interests are in the areas of personality and individual differences, leadership and influence behaviors, internal and external staffing, and job attitudes. Dr. Judge is a fellow of the American Psychological Association and the Society for Industrial and Organizational Psychology. In 1995, Judge received the Ernest J. McCormick Award for Distinguished Early Career Contributions from the Society for Industrial and Organizational Psychology, and in 2001, he received the Larry L. Cummings Award for mid-career contributions from the Organizational Behavior Division of the Academy of Management.