Items related to Out of Many, Volume 1 (6th Edition) 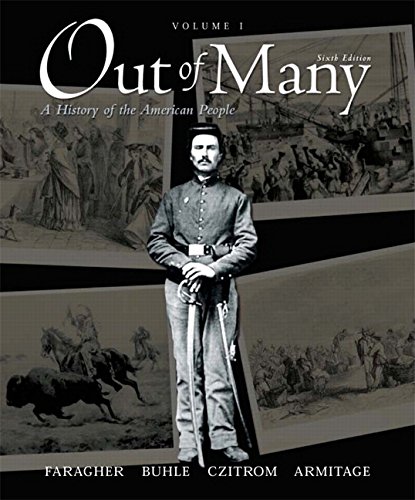 Organized around the theme of American communities, Out of Many is a blend of social and political history that reveals the geographical, racial, and economic diversity of the United States, with a special focus on the country’s regions, especially the West.

Instead of looking at the country as a homogenous whole, the authors break down the country into more meaningful and manageable building blocks: the individual, the community, the state, and the region. Showing these interplays between the individuals and groups and the groups and the regions, each chapter of the text will help students understand the textured and varied history that has produced the increasing complexity of America.

John Mack Faragher is Arthur Unobskey Professor of American History and director of the Howard R. Lamar Center for the Study of Frontiers and Borders at Yale University.  Born in Arizona and raised in southern California, he received his B.A. at the University of California, Riverside, and his Ph.D. at Yale University.  He is the author of Women and Men on the Overland Trail (1979), Sugar Creek: Life on the Illinois Prairie (1986), Daniel Boone: The Life and Legend of an American Pioneer (1992), The American West:  A New Interpretive History (2000), and A Great and Noble Scheme:  The Tragic Story of the Expulsion of the French Acadians from their American Homeland (2005).

Mari Jo Buhle is William R. Kenan Jr. University Professor and Professor of American Civilization and History at Brown University, specializing in American women’s history. She received her B.A. from the University of Illinois, Urbana—Champaign, and her Ph.D. from the University of Wisconsin, Madison. She is the author of Women and American Socialism, 1870—1920 (1981) and Feminism and Its Discontents: A Century of Struggle with Psychoanalysis (1998). She is also coeditor of Encyclopedia of the American Left, second edition (1998). Professor Buhle held a fellowship (1991—1996) from the John D. and Catherine T. MacArthur Foundation.

Daniel Czitrom is Professor of History at Mount Holyoke College. Born and raised in New York City, he received his B.A. from the State University of New York at Binghamton and his M.A. and Ph.D. from the University of Wisconsin, Madison. He is the author of Media and the American Mind: From Morse to McLuhan (1982), which won the First Books Award of the American Historical Association and has been translated into Spanish and Chinese. He is co-author of Rediscovering Jacob Riis: Exposure Journalism and Photography in Turn of the Century New York (2007). He has served as a historical consultant and featured on-camera commentator for several documentary film projects, including the PBS productions New York: A Documentary Film; American Photography: A Century of Images; and The Great Transatlantic Cable.

He currently serves on the Executive Board of the Organization of American Historians.

Susan H. Armitage is Claudius O. and Mary R. Johnson Distinguished Professor of History at Washington State University. She earned her Ph.D. from the London School of Economics and Political Science. Among her many publications on western women’s history are three coedited books, The Women’s West (1987), So Much To Be Done: Women on the Mining and Ranching Frontier (1991), and Writing the Range: Race, Class, and Culture in the Women’s West (1997). She currently serves as an editor of a series of books on women and American history for the University of Illinois Press.