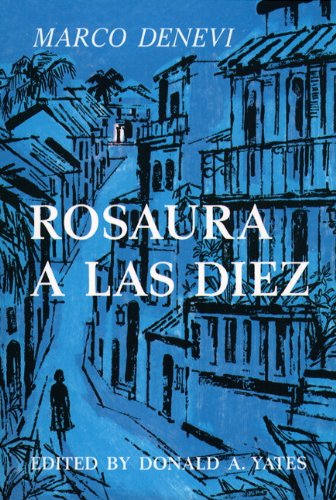 Marco Denevi's "Rosaura a las diez" comes to the classroom with an already established reputation as one of the most successful Latin American novels of the past decade. It was published in 1955 as the first-prize winner in the Guillermo Kraft novel competition of that year, and was the author's first novel. The book's vocabulary is rich, colloquial, and spiced with words and expressions that give it the individual flavor of the Spanish spoken in the Argentine Republic. It is by no means, however, a regional novel from the standpoint of dialect or profuseness of "argentinismos." It is written, rather, in a standard, colloquial Spanish relatively free of uncommon terms requiring clarification in footnotes. The "voseo" form of familiar address, which IS regional and peculiar to informal Argentine speech, figures only slightly - toward the end of the novel - and there appropriate footnotes are given. The student will find an abundant final vocabulary at the back of the book; but it is by no means a complete one. To teach one to read with ease is one of the principal aims of this text. To this end, the student will occasionally find himself referred to his own resourcefulness in the case of words he will want to look up, but will not find in the vocabulary. If a given word is not in the vocabulary, its absence - excluding editorial oversight - is owing to the fact that 1) it has been assumed to be a word familiar to the average second-year level student, or 2) it is a "guessable" word. Following all the vocabulary tips provided, one cannot help but find the reading that lies herein pleasant and richly rewarding.