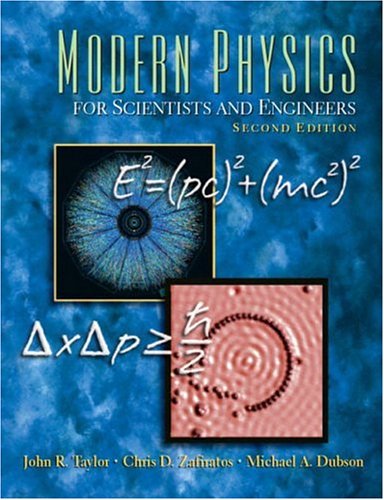 Refreshingly contemporary, this beginning-level introduction to modern physics covers all the important topics of relativity, quantum mechanics, systems with two or more atoms, and subatomic physics—but does so in a manner that won't overwhelm readers who are new to the subject. Explanations of concepts are exceptionally readable (often enlivened with humor), and an abundance of high-quality worked examples and practice problems give readers the hands-on practice necessary to master applications. The Space and Time of Relativity. Relativistic Mechanics. Atoms. Quantization of Light. Quantization of Atomic Energy Levels. Matter Waves. The Schrödinger Equation in One Dimension. The Three-Dimensional Schrödinger Equation. Electron Spin. Multielectron Atoms; the Pauli Principle and the Periodic Table. Atomic Transitions and Radiation. Molecules. Solids—Theory. Solids—Applications. Statistical Mechanics. The Structure of Atomic Nuclei. Radioactivity and Nuclear Reactions. Elementary Particles. For anyone needing an introduction to, or refresher of, modern physics.

A comprehensive introduction to the major areas of modern physics.

Book Description Condition: New. Brand new book. This is an international edition textbook with identical content as the US version. We ship all our orders from CA/IL, USA (depending on your address) and NOT from Asia! Buy with confidence from a 5-star US based seller. Choose expedited shipping for superfast delivery with tracking. Seller Inventory # 9780138057152