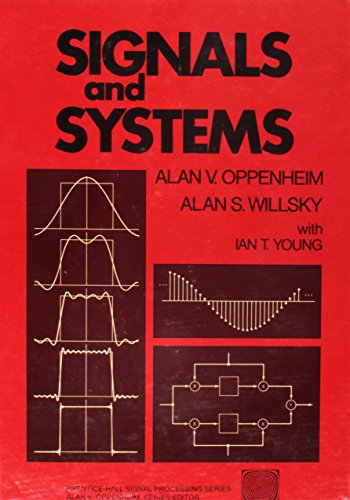 This volume provides a firm foundation in the most important methods of modern signal and systems analysis. Develops in parallel the methods of analysis for continuous-time and discrete-time signals and systems.

I.J. Nagrath is Adjunct Professor, BITS, Pilani and retired as Professor of electrical engineering and Deputy Director of Birla Institute of Technology and Science, Pilani. He obtained his BE with Hons. in electrical engineering from the university of Rajasthan in 1951 and MS from the University of Wisconsin in 1956. He has co-authored several successful books which includes Electric Machines. Modern Power System Analysis and Systems: Modelling and Analysis. He has also published several research papers in prestigious national and international journals. S N Sharan, a PhD holder in Energy from IIT Delhi, has been associated with BITS, Pilani, for a very long period and has served in different capacities, such as Group Leader, Electrical & Electronics Engineering Coordinator for the Centre for Renewable Energy and Environment Development. For the last couple of years he is the Director of Greater Noida Institute of Technology, Greater Noida. He has executed several sponsored research and development-based projects in the areas of Electronics and Energy and has also been involved in a couple of consultancy-based projects. He has published a little over 30 research and review papers in journals of international and national repute. Rakesh Ranjan received his BE in Electrical Engineering from MIT Muzaffarpur, ME from BIT, Mesra, Ranchi, and PhD from BITS, Pilani. Dr Ranjan has more than 18 years of teaching and research experience at Indian and foreign Universities. He has served as Lecturer at BITS, Pilani, as an Assistant Professor and the HOD at Defence University College, Addis Ababa, Ethiopia, and as Faculty of Engineering and Technology, Multimedia University Malaysia, Melaka Campus. Dr Ranjan joined the Institute of Technology and Management, Gurgaon, as Professor and was promoted to Dean-Academics. He also served as Principal from 2005 -2009. Currently, he is Founder Director-Principal of International Institute of Technology and Business at Sonepat, Haryana.