Items related to The Ministry of Fear: An Entertainment

Greene, Graham The Ministry of Fear: An Entertainment

The Ministry of Fear: An Entertainment 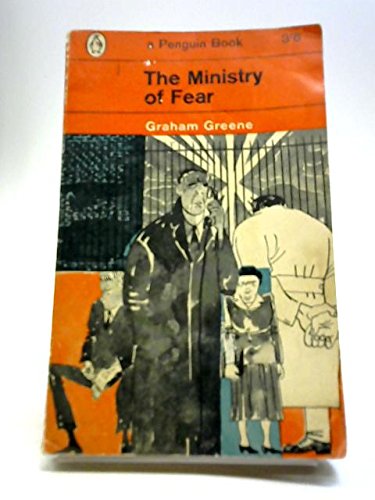 One aimless afternoon, Arthur Rowe was wandering through the streets of London. He was interrupted his walk only once to drop into a charity bazaar where-much to his suprise- he won a cake. That night a stranger, inordinately interested in the cake, appeared at Rowe's lodgings and tried to poison him. From that moment on, there closed around Arthur Rowe a strange, silent evilly efficient conspiracy...The Ministry of Fear..."A master thriller" -Time

For Arthur Rowe the charity fęte was a trip back to childhood, to innocence, a welcome chance to escape the terror of the Blitz, to forget twenty years of his past and a murder...Then he guesses the weight of the cake, and from that moment on he?s a hunted man, the target of shadowy killers, on the run and struggling to remember and to find the truth.

“Opening a new book by Graham Greene is like settling into a grand turismo car. Nothing will go wrong.” – Sunday Times

Book Description Condition: New. For Arthur Rowe, the trip to the charity fete was a joyful step back into adolescence, a chance to forget the nightmare of the blitzand the aching guilt of having mercifully murdered his sick wife. He was surviving alone, aside from the war, until he happened to guess both the true and the false weight of the cake. From that moment, he finds himself ruthlessly hunted, the quarry of malign and shadowy forces, from which he endeavors to escape with a mind that remains obstinately out of focus. Seller Inventory # 9780140018974

2. The Ministry of Fear: An Entertainment Greene, Graham

3. THE MINISTRY OF FEAR: AN ENTERTA