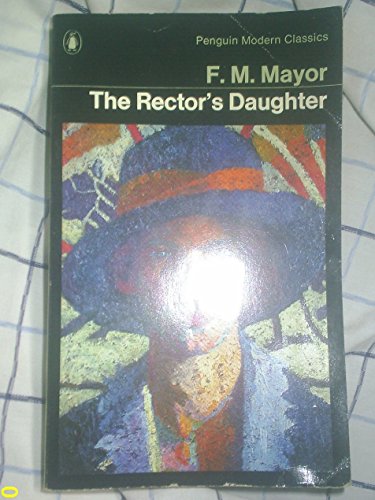 Dedmayne Rectory is quietly decaying, its striped chintz and darkened rooms are a bastion of outmoded Victorian values. Here Mary has spent thirty-five years, devoting herself to her sister, now dead, and to her father, Canon Jocelyn. Although she is pitied by her neighbours for this muted existence, Mary is content. But when she meets Robert Herbert, Mary's ease is destroyed and years of suppressed emotion surface through her desire for him. First published in 1924 this novel is an impressive exploration of Mary's relationship with her father, of her need for Robert and the way in which, through each, she comes to a clearer understanding of love.

Flora Macdonald Mayor was born in 1872 and read history at Cambridge. Five of her novels have been published, one posthumously, and a collection of stories for children. But it is this novel, published in 1913 and THE RECTOR'S DAUGHTER, published in 1924 which best express her artistic genius. After life-long ill-health she died in 1932.

The Rector's daughter, Mary Jocelyn, is "a decline... as much a part of her village as its homely hawthorns." Mary's mother is long dead, her brothers have both left England, and Ruth, her sick sister, requires constant care. Her father, Canon Jocelyn "rather despise[s] the rest of Europe" and is "an austere critic of young women, demanding little of them in action, but everything in repose." Mary's few acquaintances are old family friends to whom she feels more obligation than true affection and, try as she might to deny it, she knows all tenderness in her father died with her mother. Now a middle-aged spinster, Mary is used to being lonely, but she cannot stop longing for love. Then Mr. Herbert, the son of her father's old friend, moves into the neighborhood. Slowly, surely and without intention on either one's part, love blossoms. Love so strong that Mary cannot speak of it or control her blissful fantasies. When Mr. Herbert leaves for the seashore to recover from a chill, they both believe he will return to ask for Mary's hand in marriage. An elegantly written and scathingly honest account of society, manners, and marriage, The Rector's Daughter is a fiercely passionate and quietly tender story of love and loss. -- For great reviews of books for girls, check out Let's Hear It for the Girls: 375 Great Books for Readers 2-14. -- From 500 Great Books by Women; review by Jesse Larsen

Book Description Penguin Books, 1985. Paperback. Condition: Good. Connecting readers with great books since 1972. Used books may not include companion materials, some shelf wear, may contain highlighting/notes, may not include cdrom or access codes. Customer service is our top priority!. Seller Inventory # S_267798534

Book Description Penguin Classics 31/05/1973, 1973. Paperback. Condition: Very Good. Shipped within 24 hours from our UK warehouse. Clean, undamaged book with no damage to pages and minimal wear to the cover. Spine still tight, in very good condition. Remember if you are not happy, you are covered by our 100% money back guarantee. Seller Inventory # 6545-9780140035759

Shipping: US$ 9.57
From United Kingdom to U.S.A.
Destination, rates & speeds

Book Description Penguin Classics, 1973. Paperback. Condition: Very Good. The Rector's Daughter (Modern Classics) This book is in very good condition and will be shipped within 24 hours of ordering. The cover may have some limited signs of wear but the pages are clean, intact and the spine remains undamaged. This book has clearly been well maintained and looked after thus far. Money back guarantee if you are not satisfied. See all our books here, order more than 1 book and get discounted shipping. . Seller Inventory # 7719-9780140035759

Shipping: US$ 9.57
From United Kingdom to U.S.A.
Destination, rates & speeds

Book Description Penguin Books, 1985. Paperback. Condition: Good. The book has been read but remains in clean condition. All pages are intact and the cover is intact. Some minor wear to the spine. Seller Inventory # GOR001309668

Book Description Penguin Books Ltd, United Kingdom, London, 1973. Paperback. Condition: Very Good. The book has been read, but is in excellent condition. Pages are intact and not marred by notes or highlighting. The spine remains undamaged. Seller Inventory # GOR001503758

Shipping: US$ 23.24
From United Kingdom to U.S.A.
Destination, rates & speeds