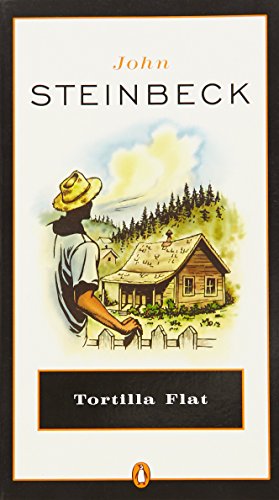 Adopting the structure and themes of the Arthurian legend, John Steinbeck created a “Camelot” on a shabby hillside above the town of Monterey, California, and peopled it with a colorful band of knights. At the center of the tale is Danny, whose house, like Arthur’s castle, becomes a gathering place for men looking for adventure, camaraderie, and a sense of belonging—men who fiercely resist the corrupting tide of honest toil and civil rectitude.

As Nobel Prize winner Steinbeck chronicles their deeds—their multiple lovers, their wonderful brawls, their Rabelaisian wine-drinking—he spins a tale as compelling and ultimately as touched by sorrow as the famous legends of the Round Table, which inspired him.

Early in the 1940s, Steinbeck became a filmmaker with The Forgotten Village (1941) and a serious student of marine biology with Sea of Cortez (1941). He devoted his services to the war, writing Bombs Away (1942) and the controversial play-novelette The Moon is Down (1942).Cannery Row (1945), The Wayward Bus (1948), another experimental drama, Burning Bright(1950), and The Log from the Sea of Cortez (1951) preceded publication of the monumental East of Eden (1952), an ambitious saga of the Salinas Valley and his own family’s history.

The last decades of his life were spent in New York City and Sag Harbor with his third wife, with whom he traveled widely. Later books include Sweet Thursday (1954), The Short Reign of Pippin IV: A Fabrication (1957), Once There Was a War (1958), The Winter of Our Discontent (1961),Travels with Charley in Search of America (1962), America and Americans (1966), and the posthumously published Journal of a Novel: The East of Eden Letters (1969), Viva Zapata!(1975), The Acts of King Arthur and His Noble Knights (1976), and Working Days: The Journals of The Grapes of Wrath (1989).

John McDonough's reading of this marvelous Steinbeck novel is not without its flaws, but they don't much diminish the charm of the performance. Tortilla Flat follows the exploits of Danny and his paisano friends, who live in squalid poverty and blissful idleness near Monterey, California. McDonough does not overact, and his gentle touch is well suited to the story. His accents and voices, however, are strangely inconsistent, as if he eventually tires of giving each character his own. Nonetheless, McDonough makes it work by bringing out the novel's humor and poignancy in all the right places. D.B. © AudioFile 2001, Portland, Maine-- Copyright © AudioFile, Portland, Maine

Book Description Condition: New. Danny, a mule skinner during the First World War, returns to Tortilla Flat to enjoy the carefree and amoral life of the paisano. Seller Inventory # 9780140042405