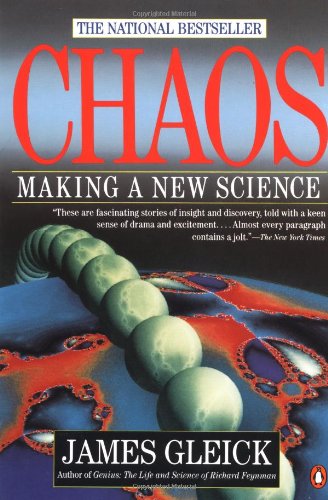 Few writers distinguish themselves by their ability to write about complicated, even obscure topics clearly and engagingly. James Gleick, a former science writer for the New York Times, resides in this exclusive category. In Chaos, he takes on the job of depicting the first years of the study of chaos--the seemingly random patterns that characterize many natural phenomena.

This is not a purely technical book. Instead, it focuses as much on the scientists studying chaos as on the chaos itself. In the pages of Gleick's book, the reader meets dozens of extraordinary and eccentric people. For instance, Mitchell Feigenbaum, who constructed and regulated his life by a 26-hour clock and watched his waking hours come in and out of phase with those of his coworkers at Los Alamos National Laboratory.

As for chaos itself, Gleick does an outstanding job of explaining the thought processes and investigative techniques that researchers bring to bear on chaos problems. Rather than attempt to explain Julia sets, Lorenz attractors, and the Mandelbrot Set with gigantically complicated equations, Chaos relies on sketches, photographs, and Gleick's wonderful descriptive prose.