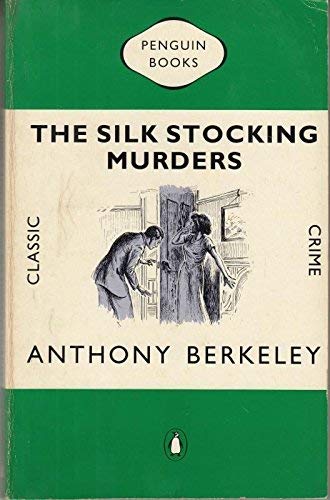 A ROGER SHERINGHAM MYSTERY. When the daughter of a country parson goes missing in London, Roger Sheringham receives a letter from her father pleading for help. As the amateur sleuth investigates, he discovers that the girl is already dead, found hanging from a door by her own silk stocking. It is presumed suicide, but when more young women are found dead in the same manner, questions arise. Was it merely copycat suicide, or will the case lead Sheringham into a maze of murder?

Born in 1893, Anthony Berkeley (Anthony Berkeley Cox) was a British crime writer and a leading member of the genre's Golden Age. Educated at Sherborne School and University College London, Berkeley served in the British army during WWI before becoming a journalist. His first novel, The Layton Court Murders, was published anonymously in 1925. It introduced Roger Sheringham, the amateur detective who features in many of the author's novels including the classic Poisoned Chocolates Case. In 1930, Berkeley founded the legendary Detection Club in London along with Agatha Christie, Freeman Wills Crofts and other established mystery writers. It was in 1938, under the pseudonym Francis Iles (which Berkeley also used for novels) that he took up work as a book reviewer for John O'London's Weekly and The Daily Telegraph. He later wrote for The Sunday Times in the mid 1940s, and then for The Guardian from the mid 1950s until 1970. A key figure in the development of crime fiction, he died in 1971.

`Anthony Berkeley is the supreme master not of the "twist" but of the "double-twist".' Milward Kennedy in the Sunday Times

Book Description Paperback. Condition: Very Good. The book has been read, but is in excellent condition. Pages are intact and not marred by notes or highlighting. The spine remains undamaged. Seller Inventory # GOR002682997

Book Description Penguin Books Ltd, London. Soft cover. Condition: Near Fine. No Jacket. Classic Crime series, printing data suggests 3rd Printing but no date given. The pages are slightly browned throughout but this might be intentional as the type face used, and the way it has been printed, with the occasional heavy type letters and light ink patches, suggests they were trying to replicate the 1941 edition. Covers are bright and shiny with small creases to front corners. 192pps. Covid 19 - Please see "More Information" for current shipping terms. Seller Inventory # 000701

Shipping: US$ 37.87
From United Kingdom to U.S.A.
Destination, rates & speeds