Items related to Once There Was a War (Classic, 20th-Century, Penguin)

Steinbeck, John Once There Was a War (Classic, 20th-Century, Penguin)

Once There Was a War (Classic, 20th-Century, Penguin) 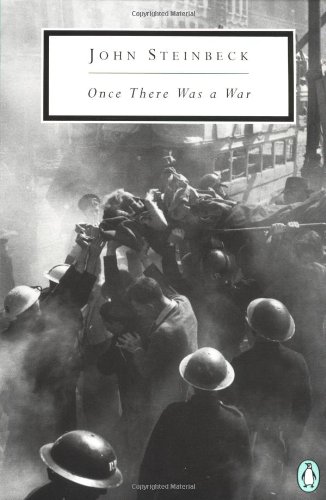 Set in England, Africa and Italy this collection of Steinbeck's World War II news correspondence was written for the "New York Herald Tribune" in the latter part of 1943.

Nobel Prize-winning author John Steinbeck is remembered as one of the greatest and best-loved American writers of the twentieth century. His complete works will be published in Penguin Modern Classics.

ONCE THERE WAS A WAR

Born in Salinas, California, in 1902, JOHN STEINBECK grew up in a fertile agricultural valley about twenty-five miles from the Pacific Coast—and both valley and coast would serve as settings for some of his best fiction. In 1919 he went to Stanford University, where he intermittently enrolled in literature and writing courses until he left in 1925 without taking a degree. During the next five years he supported himself as a laborer and journalist in New York City, all the time working on his first novel, Cup of Gold (1929). After marriage and a move to Pacific Grove, he published two California fictions, The Pastures of Heaven (1932) and To a God Unknown (1933), and worked on short stories later collected in The Long Valley (1938). Popular success and financial security came only with Tortilla Flat (1935), stories about Monterey’s paisanos. A ceaseless experimenter throughout his career, Steinbeck changed courses regularly. Three powerful novels of the late 1930s focused on the California laboring class: In Dubious Battle (1936), Of Mice and Men (1937), and the book considered by many his finest, The Grapes of Wrath (1939). Early in the 1940s, Steinbeck became a filmmaker with The Forgotten Village (1941) and a serious student of marine biology with Sea of Cortez (1941). He devoted his services to the war, writing Bombs Away (1942) and the controversial play-novelette The Moon Is Down (1942). Cannery Row (1945), The Wayward Bus (1947), The Pearl (1947), A Russian Journal (1948), another experimental drama, Burning Bright (1950), and The Log from the Sea of Cortez (1951) preceded publication of the monumental East of Eden (1952), an ambitious saga of the Salinas Valley and his own family’s history. The last decades of his life were spent in New York City and Sag Harbor with his third wife, with whom he traveled widely. Later books include Sweet Thursday (1954), The Short Reign of Pippin IV: A Fabrication (1957), Once There Was a War (1958), The Winter of Our Discontent (1961), Travels with Charley in Search of America (1962), America and Americans (1966), and the posthumously published Journal of a Novel: The East of Eden Letters (1969), Viva Zapata! (1975), The Acts of King Arthur and His Noble Knights (1976), and Working Days: The Journals of The Grapes of Wrath (1989). He died in 1968, having won a Nobel Prize in 1962.

MARK BOWDEN is the author of the New York Times bestseller and National Book Award finalist Black Hawk Down as well as Road Work, Killing Pablo, and Guest of the Ayatollah. He is a national correspondent for the Atlantic Monthly and teaches creative writing and journalism at Loyola College in Maryland.

The scanning, uploading and distribution of this book via the Internet or via any other means
without the permission of the publisher is illegal and punishable by law. Please purchase
only authorized electronic editions, and do not participate in or encourage electronic
piracy of copyrighted materials. Your support of the author’s rights is appreciated.

There is little in this classic collection of reporting that reveals the fascinating journey of the Nobel Prize-winning author behind them.

John Steinbeck could easily have avoided World War II. When he shipped out as a correspondent in 1943, he was already world famous for The Grapes of Wrath, which had been awarded the Pulitzer Prize for literature and turned into a popular and acclaimed film. He was too old for the draft at age forty-one, and was living an enviable professional life, with publishers eager for his next novel and Hollywood as his playground. He was a celebrity. Newspapers had covered every detail of his recent divorce and remarriage, and when he decided to leave his bride in New York in order to help cover the war, that, too, was news.

So why go to war? Patriotism was part of it. Steinbeck had benefited early in his career by some of the New Deal programs for writers and artists during the Depression, and may have felt a desire to give something back, to use his talent to further the “War Effort,” a concept he described with typically wry insight in the introduction to this volume. But perhaps the deeper reason was the urge felt by most men in those years to “see action,” to play some role in, if only to witness, the sweeping historical drama of the age. The world was traumatically changing shape, and to be on the sidelines must have felt like being dealt out of the future. Recruited directly by President Franklin D. Roosevelt, the novelist first contributed by writing propaganda—perhaps the most talented hack ever pressed into such service. He wrote a novel, The Moon Is Down, for a precursor to the CIA, and the book Bombs Away, about a bomber crew, for the Office of War Information. But when Steinbeck pressed for work closer to the front lines, he was told he would need to be commissioned as a military officer. As if determined to prove that there is no boon too great for government bureaucracy to squander, his request to become an air force intelligence officer was scuttled by his local draft board in California, which concluded on the basis of rumor and suspicion alone that the author of The Grapes of Wrath was sufficiently “communistic” to be regarded as a security risk. Thwarted, Steinbeck complained to friends at a dinner party in New York, lamenting that he would “never see the war.” He was promptly offered the job of correspondent for the New York Herald Tribune.

His six-month stint produced these reports, which show that for all his acclaim as a novelist, Steinbeck had not lost his humility as a writer. His reporting shows the same extraordinary empathy for the common man that ran so deep in all his work. There is a point he makes repeatedly in these dispatches, and it is this: The closer you get to war, the less you know about what is going on. He quotes a soldier, “I remember before I joined up I used to know everything that was happening. I knew what Turkey was doing. I even had maps with pins and I drew out campaigns with colored pencils. Now I haven’t looked at a paper in two weeks.” Close to action one sees only what is happening in the immediate vicinity, and in action that perspective is all one can afford.

It is a different thing, then, to be at war than to be observing and watching it from a safe distance. Steinbeck surrendered any attempt to understand the big picture, and immersed himself. Nowhere in these reports are there assessments or critiques of campaign strategy or accounts of massive troop movements. With the novelist we are simply in the war, swept along with millions of our countrymen. And like the others, mostly what we experience is neither thrilling nor terrible. Steinbeck understood that for most soldiers, the real experience of the war involved a lot of sitting around and waiting, often in unfamiliar and uncomfortable places, with many other men in the same boat.

In England, where forces were massed for the coming great assault on France and Germany, correspondents had already been competing for years over every scrap of news and every obvious feature story. Many journalists considered the place tapped out. Yet Steinbeck immediately found new material by focusing on things that “serious” journalists might regard as insignificant, and filling his accounts with workmanlike description, such as this meticulous picture of the barracks housing a Flying Fortress bomber crew: “The room is long and narrow and unpainted. Against each side wall are iron double-decker bunks, alternating with clothes lockers. A long rack in the middle between the bunks serves as a hanger for winter coats and raincoats. Next to it is the rack of rifles and submachine guns of the crew.” Details that would escape the eye of most reporters captured his, like the little gray dog that is “almost a Scottie,” who knew exactly which of the returning bombers carried his crew and would race out to greet it the moment it landed. Far more than the particulars of troop movements or the pronouncements of generals, far more than news of small victories or defeats, Steinbeck knew his readers craved stories that captured what the war looked like, how it sounded, how it smelled, how it felt. Millions of fathers, mothers, sisters, girlfriends, and wives were desperate to better understand the experience of their warriors overseas. So in each column of only eight hundred to a thousand words, Steinbeck crafted a picture in language out of the places he visited and the characters he met. He listened for the fears, joys, rumors, superstitions, and small triumphs and spun them into small stories that defined life in these long, tense months of waiting and preparation.

2. Once There Was a War (Classic, 20th-Century, Penguin) Steinbeck, John