Items related to At Home in Mitford

Jan Karon At Home in Mitford 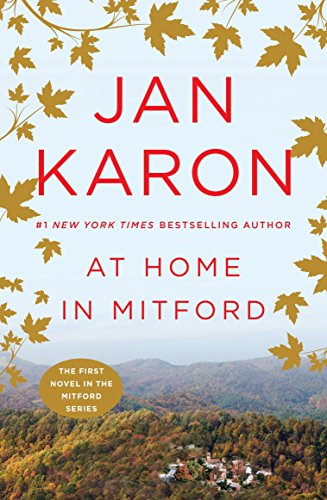 It's easy to feel at home in Mitford. In these high, green hills, the air is pure, the village is charming, and the people are generally lovable. Yet, Father Tim, the bachelor rector, wants something more. Enter a dog the size of a sofa who moves in and won't go away. Add an attractive neighbor who begins wearing a path through the hedge. Now, stir in a lovable but unloved boy, a mystifying jewel theft, and a secret that's sixty years old. Suddenly, Father Tim gets more than he bargained for. And readers get a rich comedy about ordinary people and their ordinary lives.

Father Tim, a cherished small-town rector, is the steadfast soldier in this beloved slice of life story set in an American village where the grass is still green, the pickets are still white, and the air still smells sweet. The rector's forthright secretary, Emma Garret, worries about her employer, as she sees past his Christian cheerfulness into his aching loneliness. Slowly but surely, the empty places in Father Tim's heart do get filled. First with a gangly stray dog, later with a seemingly stray boy, and finally with the realization that he is stumbling into love with his independent and Christian-wise next-door neighbor. Much more than a gentle love story, this is a homespun tale about a town of endearing characters-- including a mysterious jewel thief--who are as quirky and popular as those of Mayberry, R.F.D. --Gail Hudson

Jan Karon is the #1 New York Times bestselling author of fourteen novels in the Mitford series, featuring Episcopal priest Father Tim Kavanagh. She has authored twelve other books, including Jan Karon's Mitford Cookbook and Kitchen Reader, and several titles for children. Jan lives in Virginia near the World Heritage site of Jefferson's Monticello.

Book Description Paperback. Condition: New. Excellent condition. Interior is tight, bright and clean; no underlining, notes or highlighting. Binding is smooth and solid. Paperback cover is clean and sticker free. Minor scuffing and/or corner bumps on the paperback covers due to shelf wear. Pages are tanning. 100% Satisfaction Guaranteed. All items are carefully enclosed with bubble wrap. We ship promptly and worldwide via US Post and will email you a tracking number. Seller Inventory # SKU0028250

At Home in Mitford (Paperback or Softback)