Items related to Longitude: The True Story of a Lone Genius Who Solved...

Sobel, Dava Longitude: The True Story of a Lone Genius Who Solved the Greatest Scientific Problem of His Time 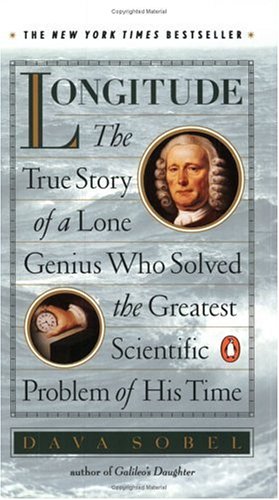 An award-winning science journalist traces the development of the marine chronometer by an obscure, uneducated clock maker--an invention that revolutionized sailing by allowing navigators to determine their ship's longitude. Reprint. Tour.

Dava Sobel's Longitude tells the story of how 18th-century scientist and clockmaker William Harrison solved one of the most perplexing problems of history--determining east-west location at sea. This lush, colorfully illustrated edition adds lots of pictures to the story, giving readers a more satisfying sense of the times, the players, and the puzzle. This was no obscure, curious difficulty--without longitude, ships often found themselves so far off course that sailors would starve or die of scurvy before they could reach port. When a nationally-sponsored contest offered a hefty cash prize to the person who could develop a method to accurately determine longitude, the race was on. In the end, the battle of accuracy--and wills--fought between Harrison and arch-rival Maskelyne was ruthless and dramatic, worthy of a Hollywood feature film. Longitude's story is surprising and fascinating, offering a window into the past, before Global Positioning Satellites made it look easy. --Therese Littleton

A fully illustrated edition of the international best-seller Longitude.

The Illustrated Longitude recounts in words and images the epic quest to solve the greatest scientific problem of the eighteenth and three prior centuries: determining how a captain could pinpoint his ship's location at sea. All too often throughout the ages of exploration, voyages ended in disaster when crew and cargo were either lost at sea or destroyed upon the rocks of an unexpected landfall. Thousands of lives and the fortunes of nations hung on a resolution to the longitude problem.

To encourage a solution, governments established prizes for anyone whose method or device proved successful. The largest reward of Ł20,000-- truly a king's ransom-- was offered by Britain's Parliament in 1714. The scientific establishment-- from Galileo to Sir Isaac Newton-- had been certain that a celestial answer would be found and invested untold effort in this pursuit. By contrast, John Harrison imagined and built the unimaginable: a clock that told perfect time at sea, known today as the chronometer. Harrison's trials and tribulations during his forty-year quest to win the prize are the culmination of this remarkable story.

The Illustrated Longitude brings a new and important dimension to Dava Sobel's celebrated story. It contains the entire original narrative of Longitude, redesigned to accompany 183 images chosen by William Andrewes-- from portraints of every important figure in the story to maps and diagrams, scientifc instruments, and John Harrison's remarkable sea clocks themselves. Andrewes's elegant captions and sidebars on scientific and historical events tell their own story of longitude, paralleling and illuminating Sobel's memorable tale.

Dava Sobel is the author of the best-sellers Longitude and Galileo's Daughter, and the editor and translator of Letters to Father. She lives in East Hampton, New York. William J. H. Andrewes is a museum consultant specializing in the history of scientific instruments and time measurement. He is the editor of The Quest for Longitude and lives in Concord, Massachusetts.

Praise for The Illustrated Longitude

"Two respected tellers of the longitude tale have teamed up! Sobel 's compelling prose is coupled with colorful and detailed illustrations provided by Andrewes. This edition responds to entreaties by readers who loved Sobel's Longitude but who wanted pictures to go with it."-- Mercator's World

"Enormous care has been devoted to the illustrations and captions. Readers will finish this book considerably more educated about geography and navigation."-- USA Today

"As much a tale of intrigue as it is of science .... A book full of gems for anyone interested in history, geography, astronomy, navigation, clockmaking, and-- not the least-- plain old human ambition and greed."-- Philadelphia Inquirer

"Intricate and elegant .... No novelist could improve on the elements of Dava Sobel's Longitude."-- Newsweek

"Anyone with an interest in history or things maritime should consider Longitude. This fascinating volume brings alive the eighteenth century."-- USA Today