Items related to Age of Iron 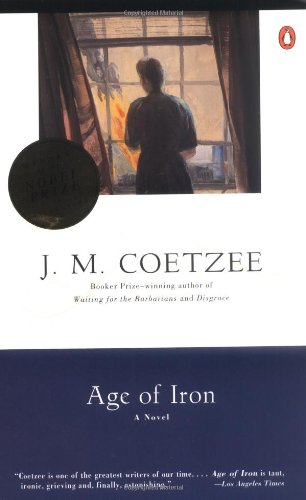 In Cape Town, South Africa, an old woman is dying of cancer. A classics professor, Mrs. Curren has been opposed to the lies and brutality of apartheid all her life, but has lived insulated from its true horrors. Now she is suddenly forced to come to terms with the iron-hearted rage that the system has wrought. In an extended letter addressed to her daughter, who has long since fled to America, Mrs. Curren recounts the strange events of her dying days. She witnesses the burning of a nearby black township and discovers the bullet-riddled body of her servant's son. A teenage black activist hiding in her house is killed by security forces. And through it all, her only companion, the only person to whom she can confess her mounting anger and despair, is a homeless man, an alcoholic, who one day appears on her doorstep.

Brilliantly crafted and resonant with metaphor, Age of Iron is "a superbly realized novel whose truths cut to the bone." (The New York Times Book Review)

the narrator in this novel, is an elderly white woman dying of cancer in a country afflicted with its own mortal sickness.

Born in Cape Town, South Africa, on February 9, 1940, John Michael Coetzee studied first at Cape Town and later at the University of Texas at Austin, where he earned a Ph.D. degree in literature. In 1972 he returned to South Africa and joined the faculty of the University of Cape Town. His works of fiction include Dusklands, Waiting for the Barbarians, which won South Africa’s highest literary honor, the Central News Agency Literary Award, and the Life and Times of Michael K., for which Coetzee was awarded his first Booker Prize in 1983. He has also published a memoir, Boyhood: Scenes From a Provincial Life, and several essays collections. He has won many other literary prizes including the Lannan Award for Fiction, the Jerusalem Prize and The Irish Times International Fiction Prize. In 1999 he again won Britain’s prestigious Booker Prize for Disgrace, becoming the first author to win the award twice in its 31-year history. In 2003, Coetzee was awarded the Nobel Prize in Literature.