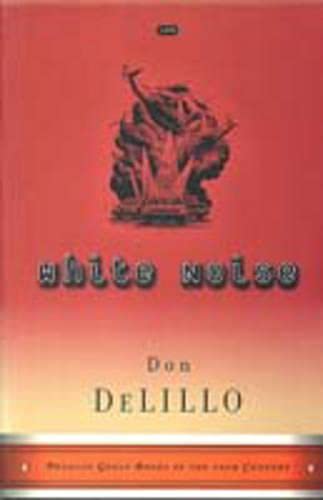 A brilliant satire of mass culture and the numbing effects of technology, White Noise tells the story of Jack Gladney, a teacher of Hitler studies at a liberal arts college in Middle America. Jack and his fourth wife, Babette, bound by their love, fear of death, and four ultramodern offspring, navigate the rocky passages of family life to the background babble of brand-name consumerism. Then a lethal black chemical cloud, unleashed by an industrial accident, floats over there lives, an "airborne toxic event" that is a more urgent and visible version of the white noise engulfing the Gladneys—the radio transmissions, sirens, microwaves, and TV murmurings that constitute the music of American magic and dread.

Something is amiss in a small college town in Middle America. Something subliminal, something omnipresent, something hard to put your finger on. For example, teachers and students at the grade school are falling mysteriously ill:

Investigators said it could be the ventilating system, the paint or varnish, the foam insulation, the electrical insulation, the cafeteria food, the rays emitted by microcomputers, the asbestos fireproofing, the adhesive on shipping containers, the fumes from the chlorinated pool, or perhaps something deeper, finer-grained, more closely woven into the fabric of things.

J.A.K. Gladney, world-renowned as the living center, the absolute font, of Hitler Studies in North America in the mid-1980s, describes the malaise affecting his town in a superbly ironic and detached manner. But even he fails to mask his disquiet. There is menace in the air, and ultimately it is made manifest: a poisonous cloud--an "airborne toxic event"--unleashed by an industrial accident floats over the town, requiring evacuation. In the aftermath, as the residents adjust to new and blazingly brilliant sunsets, Gladney and his family must confront their own poses, night terrors, self-deceptions, and secrets.

DeLillo is at his dark, hilarious best in this 1985 National Book Award winner, a novel that preceded but anticipated the explosion of the Internet, tabloid television, and the dialed-in, wired-up, endlessly accelerated tenor of the culture we live in. He doesn't just describe life in a hypermediated society, he re-creates it. His characters repeat phrases, information, and rumor gleaned from television, radio, and other media sources like people speaking in code. And DeLillo has seeded the book with short gemlike episodes that demand to be read aloud, and that haunt the imagination years after their first reading: a visit to the Most Photographed Barn in America. A plane that nearly falls out of the sky. An hour in a classroom, canonizing Elvis. These vignettes are vivid and unique, yet, like the phrases from television shows that interject themselves, out of context, into Gladney's consciousness, they are strangely unconnected to one another--reflections of the lives DeLillo is showing us we lead. --Jan Bultmann