Items related to Past In Hiding

Roseman, Mark Past In Hiding 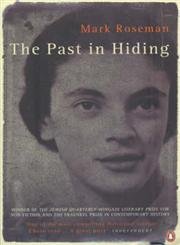 This volume is the story of a historian, Mark Roseman, and his relationship with Marianne Ellenbogen (nee Strauss) - an elderly Liverpool resident with a remarkable past. This chance meeting between an expert on Germany and a survivor of the most terrible event in Germany's history had an impact that neither party could have anticipated. Roseman interviewed Marianne Ellenbogen several times about her experiences, but then - after Marianne's death in 1996 - he found himself with access to a vast range of papers secreted in their house - photos, diaries, letters. This book is about the extraordinary physical and emotional journey these papers provoked -it is a detective story, a love story, a story of great courage and survival under impossible conditions. Drawing on interviews with those who knew Marianne, on countless papers and on Roseman's wider knowledge of the Third Reich, this story s also about a historian's investigation into the nature of memory - about a past that remained "in hiding" for more than 50 years.

Mark Roseman is Senior Lecturer in History at Keele University. His book on the Wannsee Conference: The Villa, the Lake, The Meeting will also be published by Penguin Press in June 2001.

"* "The Past in Hiding" is as raw as history, as subtle and fascinating as a fine novel, and as mysterious as life" Stanley Hoffman * "This is one of the most compelling Holocaust stories I have read...it is not just her [Marianne's] story that is fascinating, but the way that Mark Roseman tells it. He never writes as an impartial observer, but allows his analysis to inform the story. This sense of the author as modern commentator lends to a picaresque history a very special importance." Julia Pascal, The Independent."

Book Description Penguin UK. Paperback. Condition: Fair. A readable copy. All pages are intact, and the cover is intact. Pages can include considerable notes-in pen or highlighter-but the notes cannot obscure the text. At ThriftBooks, our motto is: Read More, Spend Less. Seller Inventory # G014028575XI5N00

2. The Past in Hiding

Book Description Paperback. Condition: Very Good. The book has been read, but is in excellent condition. Pages are intact and not marred by notes or highlighting. The spine remains undamaged. Seller Inventory # GOR001671457

3. The Past in Hiding

Book Description Paperback. Condition: Good. The book has been read but remains in clean condition. All pages are intact and the cover is intact. Some minor wear to the spine. Seller Inventory # GOR002107895

4. The Past in Hiding

Book Description Penguin, 2001. Condition: Fair. This is an ex-library book and may have the usual library/used-book markings inside.This book has soft covers. With usual stamps and markings, In fair condition, suitable as a study copy. Seller Inventory # 8213524

5. The Past in Hiding

Book Description Penguin 18/06/2001, 2001. Paperback. Condition: Very Good. Shipped within 24 hours from our UK warehouse. Clean, undamaged book with no damage to pages and minimal wear to the cover. Spine still tight, in very good condition. Remember if you are not happy, you are covered by our 100% money back guarantee. Seller Inventory # 6545-9780140285758

6. The Past in Hiding

7. The Past in Hiding

Book Description -. Paperback. Condition: Very Good. The Past in Hiding This book is in very good condition and will be shipped within 24 hours of ordering. The cover may have some limited signs of wear but the pages are clean, intact and the spine remains undamaged. This book has clearly been well maintained and looked after thus far. Money back guarantee if you are not satisfied. See all our books here, order more than 1 book and get discounted shipping. Seller Inventory # 7719-9780140285758

8. The Past in Hiding

Book Description Penguin, 2001. Paperback. Condition: Very Good. WE ARE PROCESSING ORDERS AS NORMAL DURING THIS VIRUS EPIDEMIC, ALL ITEMS ARE SENT BY ROYAL MAIL. DISPATCHED FROM THE UK WITHIN 24 HOURS ( BOOKS ORDERED OVER THE WEEKEND DISPATCHED ON MONDAY) BY ROYAL MAIL. ALL OVERSEAS ORDERS SENT BY AIR MAIL. WE ALSO ACCEPT PAYMENT IN US DOLLARS OR EURO BY BANK TRANSFER. Seller Inventory # mon0000620315

9. The Past in Hiding Roseman, Mark

Shipping: US$ 37.88
From United Kingdom to U.S.A.
Destination, rates & speeds