Items related to The Epic of Gilgamesh

Anonymous The Epic of Gilgamesh 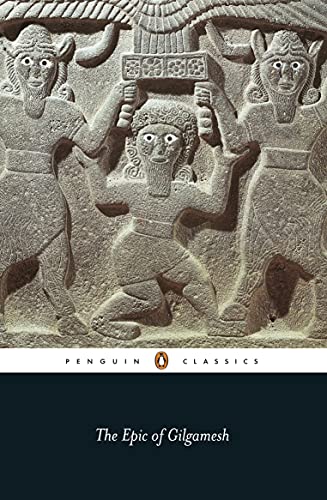 N. K. Sandars's landmark translation of one of the first and greatest works of Western literature

Gilgamesh, King of Uruk, and his companion Enkidu are the only heroes to have survived from the ancient literature of Babylon, immortalized in this epic poem that dates back to the third millennium BC. Together they journey to the Spring of Youth, defeat the Bull of Heaven and slay the monster Humbaba. When Enkidu dies, Gilgamesh’s grief and fear of death are such that they lead him to undertake a quest for eternal life. A timeless tale of morality, tragedy and pure adventure, The Epic of Gilgamesh is a landmark literary exploration of man’s search for immortality.
N. K. Sandars’s lucid, accessible translation is prefaced by a detailed introduction that examines the narrative and historical context of the work. In addition, there is a glossary of names and a map of the Ancient Orient.

This edition provides a prose rendering of The Epic of Gilgamesh, the cycle of poems preserved on clay tablets surviving from ancient Mesopotamia of the third mi llennium B.C. One of the best and most important pieces of epic poetry from human history, predating even Homer's Iliad by roughly 1,500 years, the Gilgamesh epic tells of the various adventures of that hero-king, including his quest for immortality, and an account of a great flood similar in many details to the Old Testament's story of Noah. The translator also provides an interesting and useful introduction explaining much about the historical context of the poem and the archeological discovery of th e tablets.

N. K. Sandars studied, soon after the war, with Professor Gordon Childe at the Institute of Archaeology, University of London, and took the diploma of the Institute. She continued to work at Oxford, taking a B.Litt. degree in the prehistory of Europe, and thereafter she worked on the prehistory of the Aegean, receiving a studentship at St. Hugh’s College, Oxford, a scholarship from Oxford University and a travelling prize from the University of Liverpool. She has travelled extensively in Europe and in the Near and Middle East, and has taken part in excavations in the British Isles and overseas. She has contributed article to various journals and is the author of Bronze Age Cultures in France, Prehistoric Art in Europe, Poems of Heaven and Hell from Ancient Mesopotamia, and The Sea Peoples. She is a fellow the British Academy and of the Society of Antiquaries of London and a corresponding member of the German Archaeological Institute.

Epic of Gilgamesh : An English Version With an Introduction

The Epic of Gilgamesh Paperback

The Epic of Gilgamesh (Paperback or Softback)