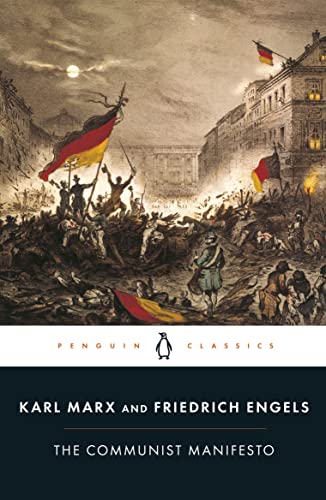 A rousing call to arms whose influence is still felt today

Originally published on the eve of the 1848 European revolutions, The Communist Manifesto is a condensed and incisive account of the worldview Marx and Engels developed during their hectic intellectual and political collaboration. Formulating the principles of dialectical materialism, they believed that labor creates wealth, hence capitalism is exploitive and antithetical to freedom.

This new edition includes an extensive introduction by Gareth Stedman Jones, Britain's leading expert on Marx and Marxism, providing a complete course for students of The Communist Manifesto, and demonstrating not only the historical importance of the text, but also its place in the world today.

"A spectre is haunting Europe," Karl Marx and Frederic Engels wrote in 1848, "the spectre of Communism." This new edition of The Communist Manifesto, commemorating the 150th anniversary of its publication, includes an introduction by renowned historian Eric Hobsbawm which reminds us of the document's continued relevance. Marx and Engels's critique of capitalism and its deleterious effect on all aspects of life, from the increasing rift between the classes to the destruction of the nuclear family, has proven remarkably prescient. Their spectre, manifested in the Manifesto's vivid prose, continues to haunt the capitalist world, lingering as a ghostly apparition even after the collapse of those governments which claimed to be enacting its principles.

"A spectre is haunting Europe - the spectre of Communism." So begins one of history's most important documents, a work of such magnitude that it has forever changed not only the scope of world politics, but indeed the course of human civilization. The Communist Manifesto was written in Friedrich Engels's clear, striking prose and declared the earth-shaking ideas of Karl Marx. Upon publication in 1848, it quickly became the credo of the poor and oppressed who longed for a society "in which the free development of each is the condition for the free development of all."
The Communist Manifesto contains the seeds of Marx's more comprehensive philosophy, which continues to inspire influential economic, political, social, and literary theories. But the Manifesto is most valuable as an historical document, one that led to the greatest political upheaveals of the nineteenth and twentieth centuries and to the establishment of the Communist governments that until recently ruled half the globe.
This Bantam Classic edition of The Communist Manifesto includes Marx and Engels's historic 1872 and 1882 prefaces, and Engels's notes and prefaces to the 1883 and 1888 editions.

3. The Communist Manifesto (Paperback or Softback)

Book Description Penguin Books Ltd, United Kingdom, 2002. Paperback. Condition: New. Revised ed. Language: English. Brand new Book. 'An astonishing masterpiece . a political classic . has an almost biblical force' Eric HobsbawmThe Communist Manifesto, Marx and Engels' revolutionary 1848 summons to the working classes, is one of the most influential political theories ever formulated. After four years of collaboration, the authors produced this incisive account of their idea of Communism, in which they envisage a society without classes, private property or a state. They argue that increasing exploitation of industrial workers will eventually lead to a revolution in which capitalism is overthrown. Their vision transformed the world irrevocably, and remains relevant as a depiction of global capitalism today.Edited with an Introduction by GARETH STEDMAN JONES. Seller Inventory # AAZ9780140447576

Book Description Penguin Classics, 2002. Paperback. Condition: New. 1st. Paperback. The Communist Manifesto (1848), Marx and Engels's revolutionary summons to the working classes, is one of the most important and influential political theories ever formulated. After four .Shipping may be from multiple locations in the US or from the UK, depending on stock availability. 304 pages. 0.220. Seller Inventory # 9780140447576