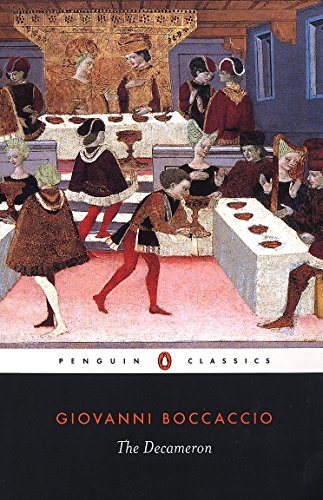 A complete edition of the hilarious, bawdy, irreverent masterpiece of medieval Italy—and the inspiration for the film The Little Hours—in an acclaimed translation

In the summer of 1348, as the Black Death ravages their city, ten young Florentines take refuge in the countryside. They amuse themselves by each telling a story a day for the ten days they are destined to remain there—a hundred stories of love, adventure and surprising twists of fate. Less preoccupied with abstract concepts of morality or religion than with earthly values, the tales range from the bawdy Peronella hiding her lover in a tub to Ser Cepperello, who, despite his unholy effrontery, becomes a Saint. The result is a towering monument of European literature and a masterpiece of imaginative narrative.

This is the second edition of G. H. McWilliam’s acclaimed translation of The Decameron. His introduction illuminates the worlds of Boccaccio and of his storytellers, showing Boccaccio as a master of vivid and exciting prose fiction.

In the early summer of the year 1348, as a terrible plague ravages the city, ten charming young Florentines take refuge in country villas to tell each other stories - a hundred stories of love, adventure and surprising twists of fortune which later inspired Chaucer, Keats and Shakespeare. While Dante is a stern moralist, Boccaccio has little time for chastity, pokes fun at crafty, hypocritical clerics and celebrates the power of passion to overcome obstacles and social divisions. Like the Divine Comedy, the Decameron is a towering monument of medieval pre-Renaissance literature, and incorporates certain important elements that are not at once apparent to today's readers. In a new introduction to this revised edition, which also includes additional explanatory notes, maps, bibliography and indexes, Professor McWilliam shows us Boccaccio for what he is - one of the world's greatest masters of vivid and exciting prose fiction.

Giovanni Boccaccio (1313–1375) was born in Florence, Italy. His life thus coincided with the flowering of the early Renaissance, and indeed his closest friend was Petrarch, the other towering literary figure of the period. During his lifetime, Boccaccio was a diplomat, businessman, and international traveler, as well as the creator of numerous works of prose and poetry. Of his achievements, The Decameron, completed sometime between 1350 and 1352, remains his lasting contribution to world literature, immensely popular from its original appearance to the present day.

G. H. McWilliam, a former Fellow of Trinity College, Dublin, was Professor Emeritus of Italian in the University of Leicester. He translated plays by Italo Svevo, Pirandello, and Betti, as well as poems by Salvatore Quasimodo, and was awarded the Italian government’s silver medal for services to Italian culture. He died in 2001.

1. The Decameron (Paperback or Softback)