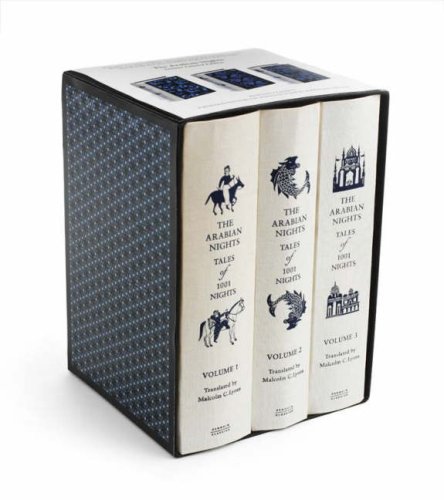 Every night for three years the vengeful King Shahriyar sleeps with a different virgin, executing her next morning. To end this brutal pattern and to save her own life, the vizier's daughter, Shahrazad, begins to tell the king tales of adventure, love, riches and wonder - tales of mystical lands peopled with princes and hunchbacks, the Angel of Death and magical spirits, tales of the voyages of Sindbad, of Ali Baba's outwitting a band of forty thieves and of jinnis trapped in rings and in lamps. One of the best known and most influential works of literature ever written, this is the first complete translation into English of "The Arabian Nights" from the Arabic since the 1880s. It also includes new translations from 18th century French of the so-called 'orphan stories', for which no original Arabic text remains. It comes in a wonderful three-volume, luxury, limited edition boxset.

Malcolm Lyons, sometime Sir Thomas Adams's Professor of Arabic at the University of Cambridge and a life Fellow of Pembroke College, Cambridge, is a specialist in the field of classical Arabic literature.His published works include the biography Saladin, the Politics of the Holy War, The Arabian Epic, Identification and Identity in Classical Arabic Poetry and many articles on Arabic literature. Ursula Lyons, formerly an Affiliated Lecturer at the Faculty of Oriental Studies at Cambridge University and, since 1976, an Emeritus Fellow of Lucy Cavendish College, Cambridge, specialises in modern Arabic literature. Robert Irwin is the author of For Lust of Knowing: The Orientalists and Their Enemies, The Middle East in the Middle Ages, The Arabian Nights: A Companion and numerous other specialised studies of Middle Eastern politics, art and mysticism. His novels include The Limits of Vision, The Arabian Nightmare, The Mysteries of Algiers and Satan Wants Me.