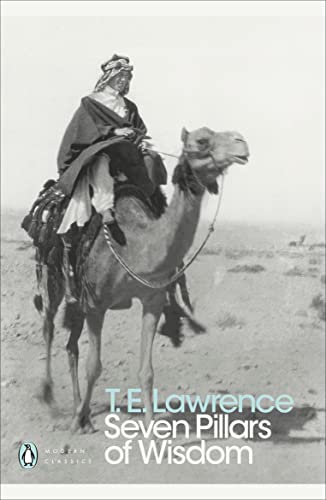 Seven Pillars of Wisdom is the autobiographical account of T.E. Lawrence - also known as 'Lawrence of Arabia' - of his service in the Arab Revolt during the First World War, published in Penguin Modern Classics. Although 'continually and bitterly ashamed' that the Arabs had risen in revolt against the Turks as a result of fraudulent British promises of self-rule, Lawrence led them in a triumphant campaign which revolutionized the art of war. Seven Pillars of Wisdom recreates epic events with extraordinary vividness. In the words of E. M. Forster, 'Round this tent-pole of a military chronicle, Lawrence has hung an unexampled fabric of portraits, descriptions, philosophies, emotions, adventures, dreams'. However flawed, T.E. Lawrence is one of the twentieth century's most fascinating figures. This is the greatest monument to his character and achievements, and formed the basis for the Oscar-winning film Lawrence of Arabia, staring Peter O'Toole and Alec Guinness. This edition includes maps, drawings by Eric Kennington, and index of place names and a preface by A.W. Lawrence. Thomas Edward Lawrence (1888-1935) was born in Wales and educated at Jesus and Magdalen Colleges, Oxford. He was commissioned on the outbreak of the First World War and in 1917 was officially attached to the staff of the Hejaz expeditionary force, under General Wingate. After the war, Lawrence was Advisor on Arab Affairs in the Middle Eastern Division of the Colonial Office. In 1927, embarrassed with the 'Lawrence of Arabia' legend, he changed his name by deed poll to Shaw'. In addition to this book, of which Lawrence lost almost the whole manuscript at Reading station in 1919, he wrote Revolt in the Desert (1927) and The Odyssey of Homer (1935), a translation in prose. If you enjoyed Lawrence of Arabia, you might also like Wilfred Thesiger's Desert Sands, available in Penguin Classics. 'I am not much of a hero-worshipper, but I could have followed T.E. Lawrence over the edge of the world' John Buchan, author of The Thirty-Nine Steps

This is the exciting and highly literate story of the real Lawrence of Arabia, as written by Lawrence himself, who helped unify Arab factions against the occupying Turkish army, circa World War I. Lawrence has a novelist's eye for detail, a poet's command of the language, an adventurer's heart, a soldier's great story, and his memory and intellect are at least as good as all those. Lawrence describes the famous guerrilla raids, and train bombings you know from the movie, but also tells of the Arab people and politics with great penetration. Moreover, he is witty, always aware of the ethical tightrope that the English walked in the Middle East and always willing to include himself in his own withering insight.

The monumental work that assured T.E. Lawrence's place in history as "Lawrence of Arabia." Not only a consummate military history, but also a colorful epic and a lyrical exploration of the mind of a great man who helped shape the Middle East as it exists today.