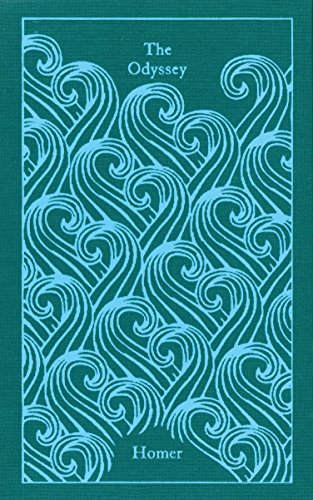 Part of Penguin's beautiful hardback Clothbound Classics series, designed by the award-winning Coralie Bickford-Smith, these delectable and collectible editions are bound in high-quality colourful, tactile cloth with foil stamped into the design. The epic tale of Odysseus and his ten-year journey home after the Trojan War forms one of the earliest and greatest works of Western literature. Confronted by natural and supernatural threats - shipwrecks, battles, monsters and the implacable enmity of the sea-god Poseidon - Odysseus must use his wit and native cunning if he is to reach his homeland safely and overcome the obstacles that, even there, await him.

HOMER is thought to have lived c.750-700 BC in Ionia and is believed to be the author of the earliest works of Western Literature: The Odyssey and The Iliad. E. V. RIEU was a celebrated translator from Latin and Greek, and editor of Penguin Classics from 1944-64. His son, D. C. H. RIEU, has revised his work. PETER JONES is former lecturer in Classics at Newcastle. He co-founded the 'Friends of Classics' society and is the editor of their journal and a columnist for The Spectator.

Tell me, Muse, the story of that resourceful man who was driven to wander far and wide after he had sacked the holy citadel of Troy. He saw the cities of many people and he learnt their ways. He suffered great anguish on the high seas in his struggles to preserve his life and bring his comrades home. But he failed to save those comrades, in spite of all his efforts. It was their own transgression that brought them to their doom, for in their folly they devoured the oxen of Hyperion the Sun-god and he saw to it that they would never return. Tell us this story, goddess daughter of Zeus, beginning at whatever point you will.

All the survivors of the war had reached their homes by now and so put the perils of battle and the sea behind them. Odysseus alone was prevented from returning to the home and wife he yearned for by that powerful goddess, the Nymph Calypso, who longed for him to marry her, and kept him in her vaulted cave. Not even when the rolling seasons brought in the year which the gods had chosen for his homecoming to Ithaca was he clear of his troubles and safe among his friends. Yet all the gods pitied him, except Poseidon, who pursued the heroic Odysseus with relentless malice till the day when he reached his own country.

Poseidon, however, was now gone on a visit to the distant Ethiopians, in the most remote part of the world, half of whom live where the Sun goes down, and half where he rises. He had gone to accept a sacrifice of bulls and rams, and there he sat and enjoyed the pleasures of the feast. Meanwhile the rest of the gods had assembled in the palace of Olympian Zeus, and the Father of men and gods opened a discussion among them. He had been thinking of the handsome Aegisthus, whom Agamemnon’s far-famed son Orestes killed; and it was with Aegisthus in his mind that Zeus now addressed the immortals:

‘What a lamentable thing it is that men should blame the gods and regard us as the source of their troubles, when it is their own transgressions which bring them suffering that was not their destiny. Consider Aegisthus: it was not his destiny to steal Agamemnon’s wife and murder her husband when he came home. He knew the result would be utter disaster, since we ourselves had sent Hermes, the keen-eyed Giant-slayer, to warn him neither to kill the man nor to court his wife. For Orestes, as Hermes told him, was bound to avenge Agamemnon as soon as he grew up and thought with longing of his home. Yet with all his friendly counsel Hermes failed to dissuade him. And now Aegisthus has paid the final price for all his sins.’

Book Description Penguin Books Ltd, United Kingdom, 2009. Hardback. Condition: New. Bickford-Smith, Coralie (illustrator). Reprint. Language: English. Brand new Book. This is the epic tale of Odysseus and his ten-year journey home after the Trojan War forms one of the earliest and greatest works of Western literature. Confronted by natural and supernatural threats - shipwrecks, battles, monsters and the implacable enmity of the sea-god Poseidon - Odysseus must use his wit and native cunning if he is to reach his homeland safely and overcome the obstacles that, even there, await him. Seller Inventory # AAZ9780141192444