Items related to James and the Giant Peach 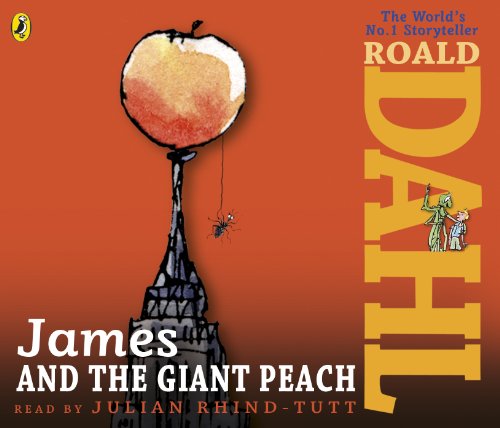 Paperback.Pub Date:2013-05-23 Language: Publisher:Puffin Puffin Audiobooks presents a brand new recording of Roald Dahls James and the Giant Peach.to be read by Green Wing actor Julian Rhind-Tutt.The audiobooks features original music and 3D sound design by Pinewood film studios.James Henry Trotters parents have been eaten by a rhinoceros.so now he lives with his two repulsive aunts.One hot day something peculiar happens and an enormous peach grows in their garden.Soon James and the Giant Peach are rolling away from his horrible aunts.towards a most marvellous and wonderful place ...

Review:
Roald Dahl's classic children's novel is now a motion picture from The Walt Disney Company, and this version of James and the Giant Peach grew out of the making of the movie. Lane Smith, conceptual artist for the film, has given James and company a new and arresting look, much in the style of his many highly regarded books, such as Math Curse and The Stinky Cheeseman. Karey Kirkpatrick, the film's screenwriter, created a text that is true to the spirit of Dahl's original, and deftly pulls young readers into the remarkable story. All in all, it's a peach of a book sure to be the pick of every child's bookshelf!
From the Publisher:
"The most original fantasy that has been published in a long time...[it] may well become a classic."
San Francisco Chronicle

"This is a stunning book, to be cherished for its story, a superb fantasy."
Chicago Sunday Tribune

"Here is a broad fantasy with all the gruesome imagery of old-fashioned fairy tales and a good measure of their breathtaking delight."
Kirkus

Book Description Audio CD. Condition: Good. Ex Library CD with usual stamps or stickers. Audio book. Good condition is defined as: a copy that has been read but remains in clean condition. All of the pages are intact and the cover is intact and the spine may show signs of wear. The book may have minor markings which are not specifically mentioned. Most items will be dispatched the same or the next working day. Seller Inventory # mon0018808896

Book Description Paperback. Condition: Very Good. Puffin Audiobooks presents a brand new recording of Roald Dahl's James and the Giant Peach, to be read by Green Wing actor Julian Rhind-Tutt. The audiobooks features original music and '3D' sound design by Pinewood film studios. James Henry Trotter's parents have been eaten by a rhinoceros, so now he lives with his two repulsive aunts. One hot day something peculiar happens and an enormous peach grows in their garden. Soon James and the Giant Peach are rolling away from his horrible aunts, towards a most marvellous and wonderful place . . . Listen to JAMES AND THE GIANT PEACH and other Roald Dahl audiobooks read by some very famous voices, including Kate Winslet, David Walliams and Steven Fry - plus there are added squelchy soundeffects from Pinewood Studios! Look out for new Roald Dahl apps in the App store and Google Play- including the disgusting TWIT OR MISS! inspired by the revolting Twits. The book has been read, but is in excellent condition. Pages are intact and not marred by notes or highlighting. The spine remains undamaged. Seller Inventory # GOR008493080

Shipping: US$ 8.55
From United Kingdom to U.S.A.
Destination, rates & speeds