Items related to Emma-Jean Lazarus Fell Out of a Tree

Tarshis, Lauren Emma-Jean Lazarus Fell Out of a Tree 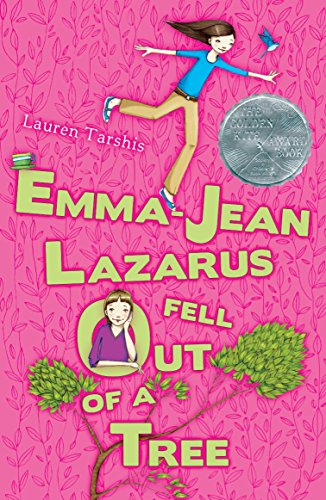 A heartwarming story from the author of the I SURVIVED series.

Emma-Jean Lazarus is the smartest and strangest girl at William Gladstone Middle School. Her classmates don't understand her, but that's okay because Emma-Jean doesn't quite get them either. But one afternoon, all that changes when she sees Colleen Pomerantz crying in the girl's room. It is through Colleen that Emma-Jean gets a glimpse into what it is really like to be a seventh grader. And what she finds will send her tumbling out of a tree and questioning why she ever got involved in the first place.

Emma-Jean Lazarus knew very well that a few of the seventh-grade girls at William Gladstone middle School were criers. They cried if they got a 67 of an algebra test or if they dropped their retainer into the trash in the cafeteria. They cried if their clay mug exploded in the kiln and when they couldn't finish the mile in gym. Two even cried in science, when Mr. Petrowski announced it was time to dissect a sheep's eyeball. Of course Emma-Jean had no intention of participating in such a barbaric and unhygienic activity. But crying is not a logical way to express one's opposition to the seventh-grade science curriculum. Emma-Jean submitted a memo to Mr. Petrowski, detailing her objections point by point. He had excused her from the project.

Colleen Pomerantz was not one of the criers, which is shy it was such a surprise when, on a cold February afternoon, Emma-Jean walked into the girls' room and found Colleen leaning over the sink with tears pouring down her face.

Emma-Jean's first thought was that Colleen had been injured. The halls of William Gladstone were crowded and hectic. It was possible that Colleen had been struck in the head by a carelessly slung backpack, or accidentally elbowed in the eye by a rambunctious seventh-grade boy. Emma-Jean Approached Colleen, ready to administer basic first aid if necessary.

"Are you hurt?" Emma-Jean asked.

Colleen shook her head and said in a loud voice, "Oh no! I'm really fine." She straighted her body and smiled.

Emma-Jean peered into Colleen's freckled face. She saw no blood or bruising or swelling. Colleen's pupils appeared normal. But even so, Emma-Jean was quite sure that Colleen was not fine. Certainly Colleen was not really fine. Emma-Jean spent much of her time observing people, trying to understand them better. Really fine people did not have blood-shot eyes and tear-stained cheeks.

Colleen's smile quivered, then collapsed over her braces.

"You're right, Emma-Jean," Colleen whispered. "The truth is I'm not doing well at all. I'm having some trouble, bad trouble, with some of my friends. . ." Colleen shook her head. "Some people . . . aren't nice."

Emma-Jean knew this was true. People sometimes behaved unkindly toward one another, even at William Gladstone Middle School. Hurt feelings, bruised egos, broken promises, betrayed confidences--the list of emotional injuries her fellow seventh graders inflicted on one another was dismaying long.

Of course, Emma-Jean was fond of her peers. In fact, she believed that one was unlikely to find a finer group of young people than the 103 boys and the 98 girls with whom she spent her school days. But their behavior was often irrational. And as a result, their lives were messy. Emma-Jean disliked disorder of any kind, and had thus made it her habit to keep herself separate, to observe from afar.

Colleen looked at herself in the mirror and gasped. "Oh my gosh! Look at me! I look like a monster."

Emma-Jean leaned forward and inspected Colleen's reflection. She saw nothing monstrous. Colleen's eyes were merely red and swollen, which was to be expected of a person in a distressed emotional state. Emma-Jean went to the paper towel dispenser and pulled out a length of the scratchy brown paper. She wet it, folded it into a perfect rectangle, and held it out to Colleen.

"Put his on your eyes," Emma-Jean said. "It will minimize the redness and swelling."

This treatment had always worked well for Emma-Jean's mother, who cried for several hours every July 2 and for several more every November 3. July 2 was the birthday of Eugene Lazarus, Emma-Jean's father. November 3 was the anniversary of his death. He died two years, three months, and fourteen days ago, when Emma-Jean was ten, in a car accident on I-95. He had been on his way home from a math conference, where he had submitted his award-winning paper on the legendary French mathematician Jules Henri Poincare.

Colleen accepted the wet towel and held it against her eyes. To promote an atmosphere of calm, Emma-Jean stood very still with her hands folded in front of her pressed khakis. All was silent except for the slow drip of the right-hand sink.

Emma-Jean nodded, for she too often found Laura Gilroy to be disturbing. She was bossy and loud and slammed her locker. Every day at recess, Laura led a group of seventh-grade girls, including Colleen, through a series of dance routines. If someone stumbled or did the wrong move (often it was Colleen who tripped or missed a choreographed kick or turn), Laura would laugh and call them unkind names, such as klutz or spaz. When Laura grew tired of dancing, she would run to the basketball court and snatch the ball from Will Keeler and his friends. Then she would gallop around the blacktop screaming, "Try to get me! Try to get me!"

Emma-Jean wasn't the least bit surprised that Laura Gilroy would cause Colleen Pomerantz to cry.